Maybe FDR Should Get More Blame

I have mentioned many times here how the decision of FDR and his Treasury to devalue the dollar and not sterilize gold inflows sparked a robust recovery from 1933-1936.  This development can be called the original QE program and it worked wonders despite the fact that the private sector was still deleveraging through at least 1935.
The recovery fell apart when the recession of 1937-1936 hit.  The standard story for this recession has been that some fiscal policy tightening and a lot of monetary policy tightening caused it.  On the latter point, the conventional view is that monetary policy tightened when the Fed raised reserve requirements on banks.  Douglass Irwin, however, has a new paper that calls into question this conventional wisdom.  He says it was largely a tightening of monetary policy that caused the recession, but it was not because the Fed raised reserve requirements.  Rather, it was because the Treasury started sterilizing gold inflows.  Here is Irwin:

The severity of the Recession of 1937-38 was not due to contractionary fiscal policy or higher reserve requirements. By contrast, the policy tightening associated with gold sterilisation was not modest – it did not simply reduce the growth of the monetary base by a few percentage points, it stopped its growth altogether. While the Federal Reserve is often blamed for its poor policy choices during the Great Depression, the Treasury Department was responsible for this particular policy error.

This is amazing.  One of the key decisions that drove the 1933-1936 recovery in the first place--choosing not to sterilize gold inflows--was reversed by FDR's Treasury.  It was FDR, then, who cut short the robust recovery he started.  Throw in some of the market distortions caused by his other New Deal programs (e.g. NRA) and FDR's record is looking rather checkered.  Still, I credit FDR with being bold enough to try what effectively turned out to be a robust QE program anchored by a price level target.  He showed us it can work.

Update:  This started me thinking about the big debate that intermittently raged in the blogosphere over the 2007-2009 period about the legacy of the New Deal.  I did a post back in early 2009 where I created the figure below to summarize this lively debate.  Enjoy! 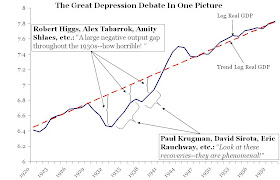