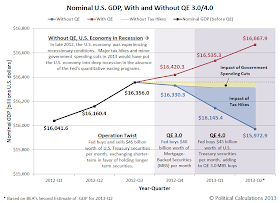 These counterfactual exercises serve as a nice complement to the on-going quasi-natural experiments that indicate monetary policy at the ZLB can still pack a punch. Yes, monetary policy is far from perfect. But it is also far from impotent as claimed by some QE skeptics.
David Beckworth at 1:52 PM
Share