Some Evidence on the Importance of Expectations

Modern macroeconomics tells us that expectations are crucial to economic decision making.  It is not hard to see why.  Imagine someone is going to get a big pay raise next year and it will be permanent going forward.  It is highly likely that as a result of this change the person will increase his spending today, all else equal. I see this scenario every year with college students who have landed a job, but have yet to start working and get a paycheck. They feel more financially secure and start making bigger purchases such as a new car.


Now think about all those households that are being financially cautious because they are uncertain about their investments and job prospects in the future. If suddenly they feel more secure about their future incomes, they too will start spending more. Same thing for firms sitting on cash. Improve their forecast of sales and they will start hiring more workers and building more plants to meet that expected rise in demand for their goods.

This is why expectations is such a big part of modern macroeconomics. And it is why the Fed could pack more of punch if it did a better job managing expectations about future nominal spending (and by implication inflation) via a nominal GDP level target.  Now the Fed would probably need to back up its announcement for higher nominal spending with additional asset purchases, but if taken seriously the public would do much of the heavy lifting. That is, households and firms would start rebalancing their portfolios away from safe, liquid assets toward riskier, higher yielding ones that would create positive balance sheet and wealth effects for spending.  Some of the portfolio rebalancing would go toward capital assets that would directly affect spending.  These developments would improve the economic outlook and that, in turn, would further reinforce the decision to spend more today.


But some folks are not convinced.  They want more than stories.  They want evidence that by changing expectations the Fed can change current nominal spending.   Here is my attempt to provide some evidence on this question.  It is brief and much more could be done, but I think it should be sufficient to give the skeptics pause.

First, many observers have documented that FDR changed nominal expectations at the depths of the Great Depression by talking up a price level target and backing it up by devaluing the gold content of the dollar.   Gautti Eggertson probably has the best known piece on how expectations were crucial to this experience, but also see here for how the change in expectations influenced nominal spending.  What is remarkable about this experience is that FDR was able to turn around expectations despite almost three and half years of deflation and economic collapse.  That FDR could do this in such dire circumstances suggests it could be done today.

Second, it is fairly straightforward to empirically demonstrate that both inflation expectations and nominal spending expectations have been important to current nominal spending.  This can be done using the quarterly Survey of Professional Forecasters from the Philadelphia Fed.  This survey has inflation and nominal GDP forecasts for the next five quarters that go back to 1968:Q4.  The next two figures show that if one takes the average forecast for the next four quarters and plots it against the actual subsequent nominal GDP growth that occurred over the next year there is a systematic relationship: 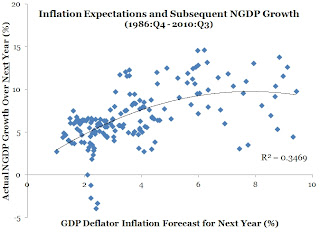 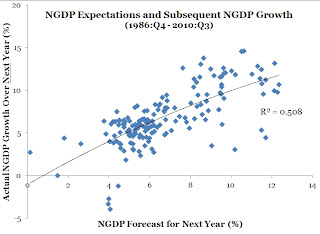 Now the relationship is not perfect--you wouldn't expect it to be because subsequent shocks could come along over the next year--but it is strong enough to suggest expectations about the future do influence current spending decisions.  Plotting the forecasts against just the current quarter (whose value is unknown at the time of forecast) yields similar results.

Now since the above data is in growth rate form, we don't have to worry about spurious relationships emerging from trends.  We might, however, wonder if these figures are picking up some kind of serial correlation coming from an omitted variable.  In order to address this question, I ran ran a vector autoregression (VAR) that had as variables the forecasted nominal GDP growth rate for the next year (same as above) and the current quarter nominal GDP growth rate (annualized).  Five lags were used since this many is sufficient to whiten the residuals and get rid of any serial correlation.  The VAR also allows me to answer this important question: what happens to the current nominal GDP growth rate when there is an unexpected change in its forecasted growth rate over the next year?  (These unexpected changes or shocks to the nominal GDP forecasts are those movements in the forecast that could not have been predicted by changes in its own past values or by changes in the past values of actual nominal GDP.) 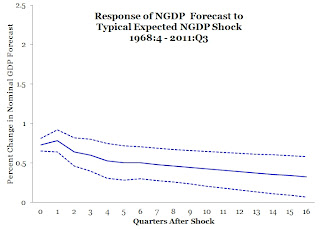 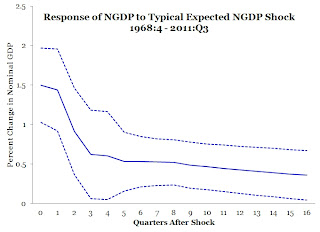 To summarize, the evidence from the scatterplots and the vector autoregressions indicates that current dollar spending is very sensitive to changes in both expected inflation and expected nominal spending.  These findings suggest, then, that if the Fed did adopt a nominal GDP level target--something that would definitely jolt expectations--it is likely that nominal spending would respond quickly and meaningfully.
Posted by David Beckworth at 10:09 PM