Another way of saying this is that by targeting the growth path of NGDP, the Fed will be taking a seesaw approach to monetary stability. That is, endogenous changes in the money supply will be automatically offset by changes in money velocity and vice versa. This is illustrated below: 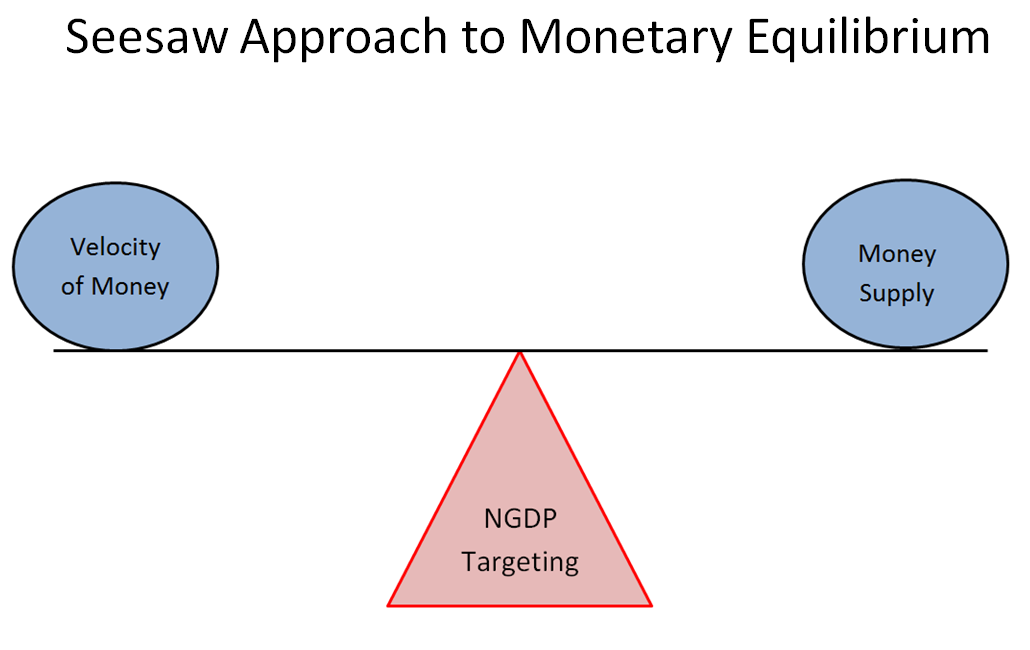 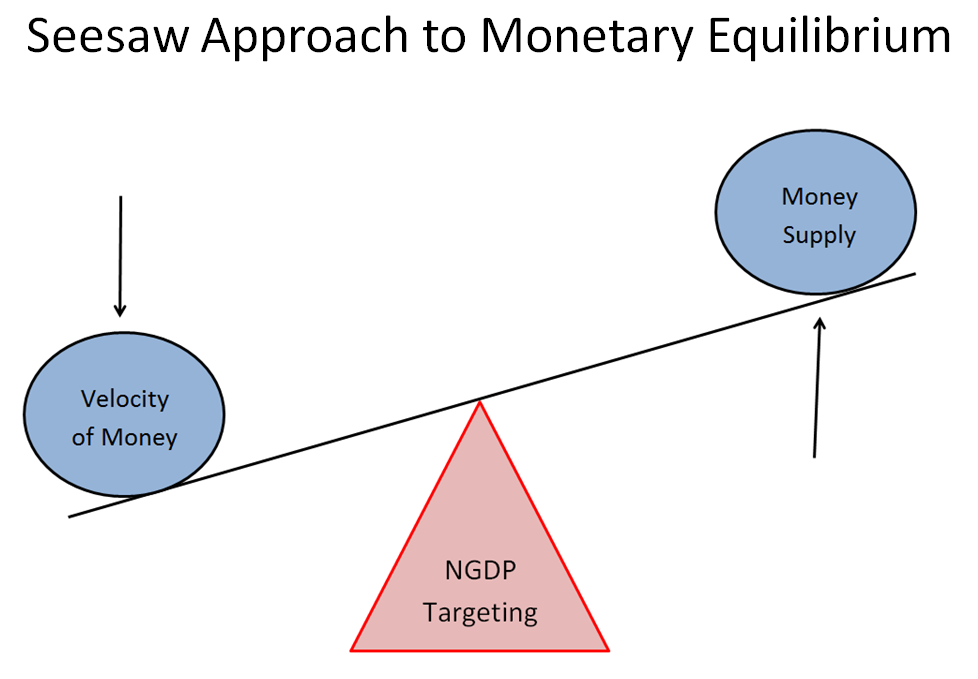 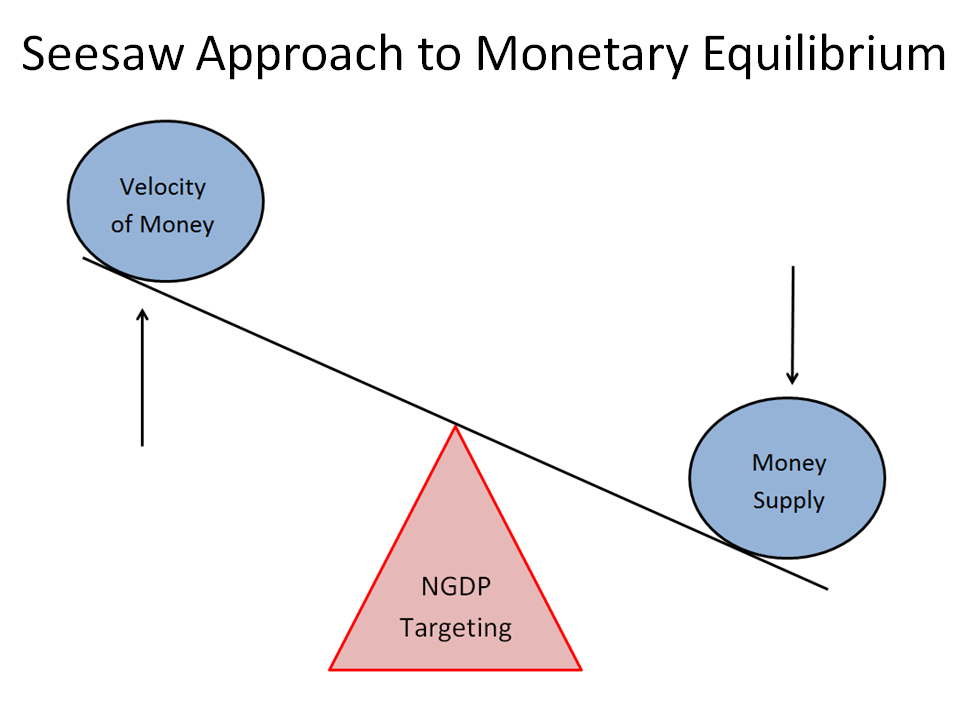 Now to be clear, most money is inside money--money endogenously created by banks and other financial firms--and the Fed only indirectly influences its creation. However, it does so in an important way by shaping the macroeconomic environment in which money gets created. Consequently, it can have a large influence on inside money creation. For the same reason it can also influence how stable is the velocity of money. By successfully stabilizing the expected growth path of total dollar spending, the Fed will be causing this seesaw process to work properly.

Here is the interesting thing. Even though the Fed was not officially targeting NGDP, it effectively seem to be practicing the seesaw approach to monetary policy over much of the Great Moderation period. This can be seen in the figure below which shows the growth rate of Divisia M4- money supply and the growth rate of its velocity. Note how these two series tend to offset each other as implied by the seesaw approach: 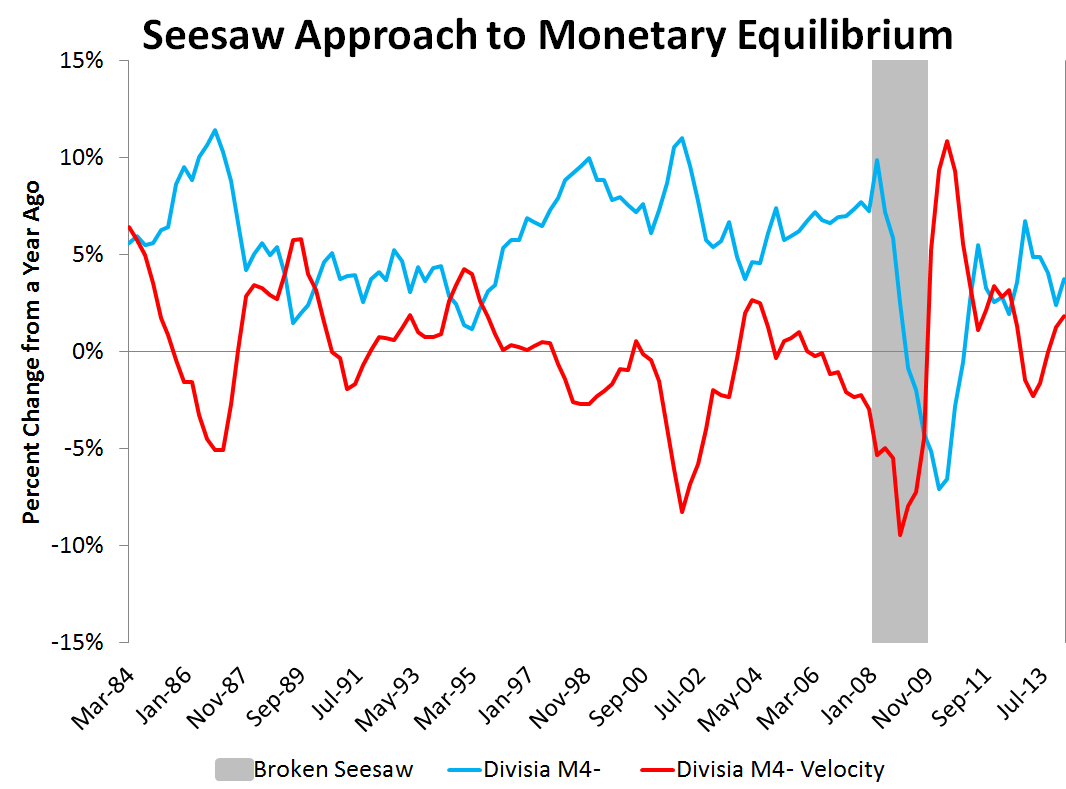 Source
Now note the area in the the grey bar. During this time the figure shows there was no offsetting movements. The money supply and velocity both fell--the seesaw process was broken. It was during this time that the Fed failed to stabilize total dollar spending and this allowed the emergence of the Great Recession.

One way, then, to view the Fed's job is that it should aim to keep the monetary seesaw process working properly. For a long time it did that, but failed spectacularly in 2008-2009. It would be whole lot easier going forward if the Fed explicitly adopted a NGDP level target.

P.S. The seesaw process is another way of looking at Milton Friedman's Thermostat Approach to monetary policy, as noted by Nick Rowe.
Posted by David Beckworth at 6:30 AM