It Takes A Regime Shift to Raise an Economy

This week we learned that Ben Bernanke does not view NGDP level targeting, price level targeting, or a higher inflation target as the best way to deal with the zero lower bound (ZLB) problem. Now I believe the "what to do at the ZLB" debate is becoming moot as the U.S. economy improves, but it is interesting to consider Bernanke's thoughts on these alternative approaches to monetary policy. Here he is questioning their usefulness at the ZLB relative to his preferred approach:

The second possible direction of change for the monetary policy framework would be to keep the targets-based approach that I favor, but to change the target. Suggestions that have been made include raising the inflation target, targeting the price level, or targeting some function of nominal GDP... a principal motivation that proponents offer for changing the monetary policy target is to deal more effectively with the zero lower bound on interest rates. But economically, it would be preferable to have more proactive fiscal policies and a more balanced monetary-fiscal mix when interest rates are close to zero. Greater reliance on fiscal policy would probably give better results, and would certainly be easier to explain, than changing the target for monetary policy.

So Bernanke wants the Fed to keep its inflation target of 2% and complement it with more aggressive use of fiscal policy when up against the ZLB. It sounds reasonable, a more balanced mix of monetary and fiscal policy. What could possibly go wrong? A lot, actually, if you believe this approach would have generated substantially greater aggregate demand growth over the past six years.

Here is why. Fiscal policy can only create aggregate demand growth up to the point it pushes inflation to the Fed's 2% target. The Fed's preferred inflation measure, the PCE deflator, averaged 1.4% since 2009. That means fiscal policy would have had 60 basis points on average with which to work over the past six years in closing the output gap. Do we really think that would be enough for the level of aggregate demand shortfall experienced over this time?

What was needed was a monetary policy regime shift, one that would have allowed, if needed1, a permanent increases in the non-sterilized portion of the monetary base to spur rapid growth in total dollar spending. It was never going to happen with a 2% inflation target. Imagine, for example,  the U.S. Treasury Department sent $5000 checks to every household. As individuals began to spend their new money inflation would start rising, but it could only rise by 60 basis points before the Fed started tightening policy. The 'helicopter drop' would be stillborn.

As a counterexample, consider a regime shift to a price level target. This is not my preferred approach, but it illustrates well that the type of monetary regime needed to restore full employment over the past six years was far from a 2% inflation target. Here is how I describe it from an earlier post:


One [such] monetary regime change would be a price level target that returns the PCE to its pre-crisis trend path. To return the PCE to its targeted path would require a temporary burst of higher-than-normal inflation. The expectation of and realization of this inflation burst would be the catalyst that spurred robust aggregate demand growth. 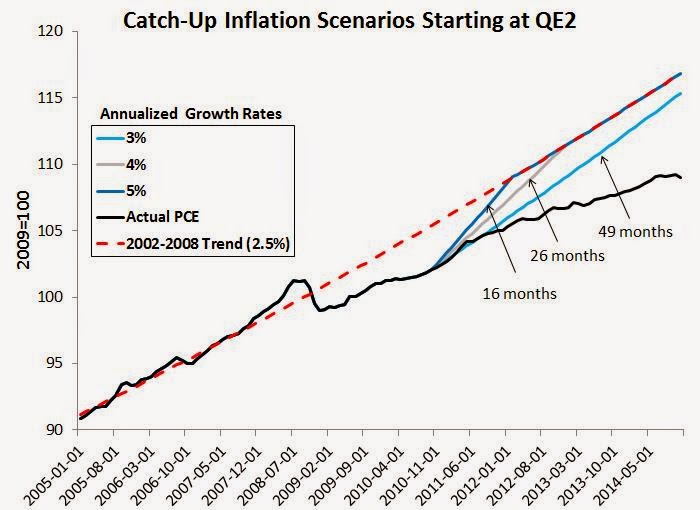 What this illustrates is that to get the kind of robust aggregate demand growth needed to close the output gap back in 2010, there needed to be a sustained (but ultimately temporary) period of higher-than-normal inflation. Doing more fiscal policy to squeeze out the last 60 basis points of the Fed's 2% inflation target would not cut it...it would be tinkering on the margins. If fiscal policy really wanted to close a large output gap at the ZLB it too needs the support of monetary regime change.

Again, I think the ZLB debate is becoming moot for the U.S. economy. But this discussion highlights why I believe greater use of fiscal policy over the past few years would not have heralded a stronger recovery. The U.S. economy has been chained to a monetary regime that while effective in anchoring inflation expectations also served to stymie a full-throttle recovery. If you want fiscal policy to work, you have to have a monetary regime that works. This was the core issue, not the degree of monetary-fiscal policy mix.

So yes, a regime shift was needed over the past six years. I would like to have seen a shift to a NGDP level target. Not only would it addressed the ZLB problem, but it also deals with the knowledge problem, financial stability, and supply shocks better than a price level or higher inflation target. For an accessible discussion of these points see my piece with Ramesh Ponnuru on the right goal for central banks. For a NGDP proposal that utilizes a monetary-fiscal mix see this post.
1A permanent increase in the monetary base may not be necessary if the the regime shift causes the velocity of money to sufficiently change. The actual expansion may not be needed or be very small if this commitment is credible. To see this, imagine the Fed targets the growth path of nominal GDP (i.e. a NGDP level target). If the public believes the Fed will permanently expand the monetary base if NGDP is below its targeted growth path, then the public would have little reason to increase their holdings of liquid assets when shocks hit the economy. That is, if the public believes the Fed will prevent the shock from derailing total dollar spending they would not feel the need to rebalance their portfolios toward safe, liquid assets. This, in turn, would keep velocity from dropping and therefore require minimal permanent monetary injections by the Fed to hit its NGDP level target.
Posted by David Beckworth at 3:24 PM