Okay, so Brexit did not cause the biggest money demand shock since 2008. Global equity markets, as noted by Kelly Evans, have regained much of their losses since the Brexit vote. Also, the initial surge in the trade-weighted dollar that had me worried appears to have peaked with just over 2 percent growth. This is good news that I did not expect.

This is not to say, however, that Brexit has had no lasting negative effect on financial markets. One of the concerns I initially raised was that Brexit would accelerate the global race to the bottom for safe asset yields. The 10-year treasury yield is now drifting around 1.45 percent--an almost 30 basis point decline since the Brexit vote. The decline is almost 40 basis points if we look back to early June when polling first showed Brexit pulling ahead in the polls. A similar pattern occurs for the 10-year German bond yield as seen in the figure below. 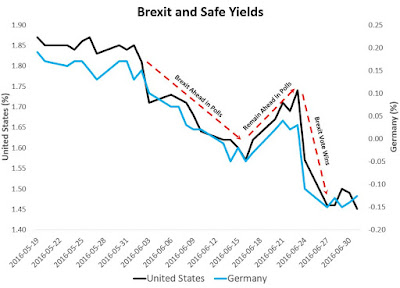 This sustained decline in safe yields is a non-trivial matter. As I have noted before, at some point these ongoing declines in safe yields will hit an effective lower bound. When that happens something else will have to adjust if there is still demand for more safe assets. That something else will be real economic activity as shown by  Caballero, Fahri, and Gourinchas (2016). Brexit, in other words, has pushed the global economy closer to a recession.

Brexit's effect on the dollar is also something we need to monitor. As I have explained before, the dollar is already up about 20 percent since mid-2014. It is a key reason the global economy has slowed down since this time. The dollar's strength is weighing down dollar block countries (like China) that peg to the dollar as well as causing problems for all those external debtors holding a whopping $10 trillion in dollar denominated debt. The dollars ongoing strength, in my view, is the biggest threat to the global economy. There is only so far the dollar's strength can go--or so much China can tinker on the margin with small devaluations--before we will see a repeat of the financial problems of last August and January.

Now the immediate impact of Brexit on the dollar is to have pushed it up just over 2 percentage points. This I would attribute to the elevated uncertainty coming from Brexit that has pushed more investors into safe dollar-denominated assets. This is a step in the wrong direction for the dollar.

Brexit, however, has also delayed any expected rate hikes for this year and maybe even next year. This is why the dollar has not risen more. Take away this expected delay in interest rate hikes and the uncertainty shock would surely have pushed the dollar much higher. So, for now, Brexit may actually have given China and dollar-vulnerable countries a reprieve from a even stronger dollar.

But this very reprieve and the calm that has returned to equity markets may also be the global economy's undoing. It may embolden the Fed to start talking up interest rate hikes again. Put differently, the siren lure of the relative calm in financial markets may give Fed officials--who yearn for the normalization' of monetary policy--itchy trigger fingers again. Last time those hose itchy trigger fingers got going, they had talked up interest rate hikes so much that the dollar rose almost 25 percent and sparked financial stress around the world. This is what we want to avoid.

Brexit, in short, has turned out better than I expected but is not without problems. It has precipitously lowered safe yields and has potentially put in motion the dynamics for a stronger dollar.

P.S. Here is a Bloomberg TV interview I did that makes some of these same points. Here is a great article by Bloomberg's Luke Kawa that further explains my arguments in the interview. A similar point is made by Ylan Mui in the Washington Post. Finally, here is Vox's Timothy Lee explaining how the real threat to the EU is not Brexit, but the ECB and more fundamentally the Euro itself. He draws upon my new working paper on the Eurozone crisis that I highlighted here.
Posted by David Beckworth at 2:46 PM