Was it Nominal or Real?

Scott Sumner has been arguing for some time that the current recession mutated from a mild downturn in early 2008 to a sharp contraction in late 2008 and early 2009 because of a nominal shock, not a real one. Specifically, he has been making the case that monetary policy effectively tightened in late 2008 and, as a result, nominal spending collapsed and pulled down an already weakened economy. According to this view, real shocks like the one coming from the financial crisis or the spike in oil prices, which were important in starting the recession, cannot explain the severity of the downturn that began in late 2008. As readers of this blog know, I have been sympathetic to this view as can be seen here and here. Many observers, however, do not buy it or if they do find it plausible refuse to endorse it due to the lack of empirical evidence. This post is my attempt to shed some light on this debate by using some rigorous (albeit imperfect) empirical methods to tease out what shocks drove the collapse in nominal spending. This essay is in some ways an extension of what I did earlier this week, but it is motivated more by the need for empirical evidence. I won't claim it is conclusive, but it is a start.

In order to uncover the shocks that drove the collapse in nominal spending, I turned to a vector autoregression that as a base line model included expected future inflation, nominal spending, and spreads on corporates yields. The expected future inflation data comes from the Philadelphia Fed's survey of economic forecasters, nominal spending is final sales to domestic purchasers, and corporate spreads are the difference between the yield on BAA and AAA corporate bonds. The reasons for using these variables is as follows. First, Scott has been arguing that the collapse of expected future inflation in late 2008 reflected an effective tightening of monetary policy that translated into reduction of current nominal spending. In other words, the market saw deflationary pressures on the horizon and immediately cut back on spending. Second, the corporate spreads provide a convenient measure of the financial crisis and should control for any collapse in nominal spending coming from a negative financial shock. The data for these variables run from 1971:Q1 thru 2009:Q2.

The VAR was specified and estimated in a conventional manner.* With the VAR estimated I then did a historical decomposition which decomposes or attributes the forecast error for a particular series--in this case the nominal spending growth rate--into shocks or non-forecasted movements in other series. In the baseline model, the other series are expected future inflation and the financial crisis. In other words, this exercise shows how much of the non-forecasted movements in nominal spending can be explained by non-forecasted movements in expected future inflation. The figure below graphs the results of this exercise. In this figure, the other series contribution to the forecast error--the difference the actual and forecasted nominal spending growth rate--is shown by the dashed lines. The closer a dashed line is to the solid red line the more of the forecast error is explained by that shock: (Click on figure to enlarge) 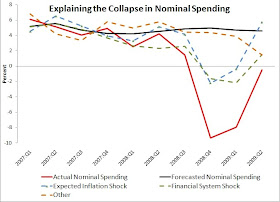 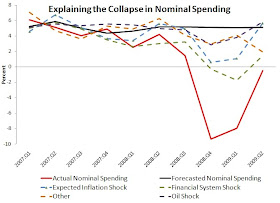 One problem with the above analysis is that it assumes the change in expected inflation is a good measure of the stance of monetary policy. I have argued elsewhere on this blog that a better measure is the difference between the nominal spending growth rate and the federal funds rates. I redid the model with this measure of the stance of monetary policy and this is what I found: (Click on figure to enlarge) 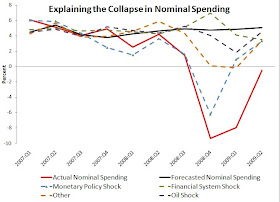 *The VAR had 5 lags to remove serial correlations and the variables were all in rate form so no unit root problem.