Monetary Policy and the Pre-Crisis Problems in Financial Institutions

I. Macroeconomic Complacency
The first point is related to the reduction of macroeconomic volatility beginning in the early 1980s that has become known as the Great Moderation. This development can be seen in the figure below which shows the rolling 10-year average real GDP growth rate along with one-standard deviation bands. These standard deviation bands provide a sense of how much variation or volatility there has been around the 10-year average real GDP growth rate. The figure shows a marked decline in the real GDP volatility beginning around 1983. 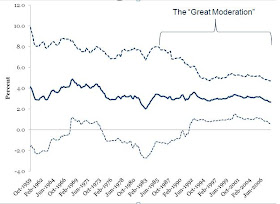 Solid line = 10 year rolling average of real GDP growth rate
Dashed line = 1 standard deviation
Now there are many stories for this reduction in macroeconomic volatility and one of the more popular views is that the Federal Reserve (Fed) did a better job running countercyclical monetary policy. In fact, Fed Chairman Ben Bernanke made this very point in a famous 2004 speech. I think there is merit to this view, but not quite in the same way as does Bernanke. During this time one of the key ways through which the Fed was able to reduce macroeconomic volatility was by responding asymmetrically to swings in asset prices. Asset prices were allowed to soar to dizzying heights but cushioned on the way down with an easing of monetary policy (e.g. 1987 stock market crash, 1998 emerging market crisis, 2001 stock market crash). The Fed also used its powerful moral suasion ability to goad creditors into helping the distressed and systemically important LTCM hedge fund. All of these actions served to prevent problems in the financial system from affecting the real economy and thus, were probably a big factor behind the "Great Moderation" in macroeconomic activity. However, they also appear to have caused observers to underestimate aggregate risk and become complacent. This, in turn, likely contributed to the increased appetite for the debt during this time. This interpretation of events was recently alluded to by Fed Vice-Chairman Donald Kohn in a 2007 speech:

In a broader sense, perhaps the underlying cause of the current crisis was complacency. With the onset of the “Great Moderation” back in the mid-1980s, households and firms in the United States and elsewhere have enjoyed a long period of reduced output volatility and low and stable inflation. These calm conditions may have led many private agents to become less prudent and to underestimate the risks associated with their actions.While we cannot be sure about the ultimate sources of the moderation, many observers believe better monetary policy here and abroad was one factor; if so, central banks may have accidentally contributed to the current crisis.

So a macroeconomic complacency created in part by the Federal Reserve set the stage for one of the biggest credit and housing booms in modern history.

Monetary policy may influence banks’ perceptions of, and attitude towards, risk in at least two ways: (i) through a search for yield process, especially in the case of nominal return targets; and (ii) by means of the impact of interest rates on valuations, incomes and cash flows, which in turn can modify how banks measure risk.

He goes on to empirically show a strong link between the easy monetary policy and risk-taking by banks during the early-to-mid 2000s using a database of 600 banks in the Europe and the United States. Similar work has been done by Tobias Adrian and Hyun Song Shin as I noted in this previous post. In their paper they find the following:

I see the macroeconomic complacency idea discussed above as setting the stage for and reinforcing the risk-taking channel of monetary policy. Of course, if so then this undermines the the Sumnerian view that all was well with a 5% trend growth rate for nominal expenditures during the Great Moderation but that is another story.
David Beckworth at 8:57 AM
Share