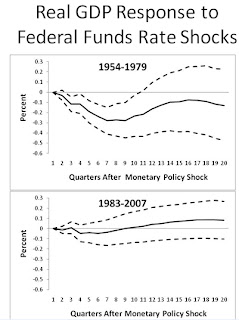 Just looking at these two figures could lead one to conclude monetary policy became less important over time.  Some observers, however, argue that during the latter period monetary policy did a better job responding to economic shocks and thus, helped paved the way for the "Great Moderation" in economic activity.  If so, it would make it difficult to find as strong a relationship between the Fed's operational instrument, the federal funds rate, and economic activity during the "Great Moderation" than before.  This is the point Nick Rowe is making.  It is also one that Jean Boivin and Marc P. Giannoni convincingly make in this influential paper (ungated version).
Second, this line of reasoning also means that one cannot look at measures of money--monetary base, M1, M3, etc.--and conclude they are unimportant for monetary policy.  Adam P. notes, for example, that with an inflation-targeting central bank a zero correlation between the monetary base and the inflation rate does not mean that the monetary base is inconsequential for inflation, but only that the central bank is doing its job well.  Similarly, Nick Rowe explains elsewhere that if a central bank is successfully targeting a nominal GDP growth rate, then one should not expect to find a relationship between the money supply and nominal GDP growth. Again, this does not mean money is unimportant. What it does mean is that the central bank is managing to offset shocks to velocity and money supply such that nominal GDP growth is being stabilized.
Josh Hendrickson makes a strong case that during the "Great Moderation" the Federal Reserve effectively was targeting nominal GDP growth of around 5%.  If so, then the above reasoning implies that during this time there should be a strong negative relationship between the growth rates of the money supply (M) and velocity (V), but little if any relationship between that of the money supply and nominal GDP.  However, this should be less true prior to this time when the Fed was not stabilizing the nominal GDP growth rate--the period of the "Great Inflation"--and there really was no nominal anchor for U.S. monetary policy.  The graphs below provide evidence on this claim. 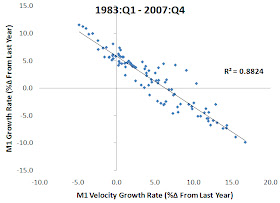 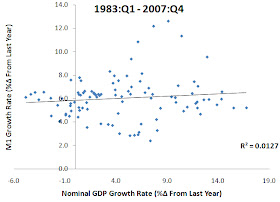 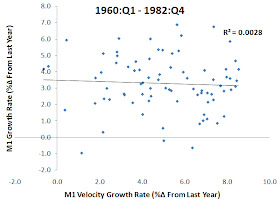 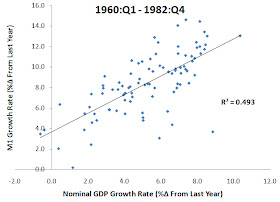 Similar evidence can be found using other monetary aggregates.  Now these graphs should not be interpreted as meaning the Fed should target a monetary aggregate.  Rather, they should be viewed as evidence that it is difficult to assess the effectiveness of successful monetary policy by looking at indicator variables and policy instruments.  What observers should be looking to is the central's bank's nominal target to see if it is being maintained on average.  Ultimately, that is the best indication of monetary policy's effectiveness.

Of course, the problem currently is we do not really know with certainty the Fed's nominal target.  Is it 2% inflation, 5%  nominal GDP growth, a price level target, or something else? Here the Fed could improve.  It should announce an explicit nominal target and commit to maintaining it no matter what.  Obviously, I would like it to announce a nominal GDP level target, but any announcement would be an improvement over the uncertainty we have now.
1These responses come from a standard structural vector autoregression that included real GDP, commodity prices, CPI, and the federal funds rate. Six lags were used.
David Beckworth at 10:43 AM
Share