Michael Woodford continues to do God's work on the pages of the Wall Street Journal and an in an interview with Bloomberg.  In the former, he, along with Frederick Mishkin, advance the case for nominal GDP (NGDP) level targeting by showing how the current innovations to Fed policy are effectively a step in that direction.  They carefully point out these changes allow for catch up aggregate demand growth while still anchoring long-run inflation expectations, the very essence of a NGDP level target.  Woodford further expounds on this idea in his Bloomberg interview.

This is an important point, because many see nominal GDP level targeting as giving license to the Fed to do excessive money creation.  On the contrary, it provides a solid long-run nominal anchor while allowing inflation to move in response to supply shocks in the short-run.  Here is how I described it earlier:

A level target anchors long-run inflation expectations, but allows for temporary catch-up growth or contraction in NGDP so that past misses in aggregate nominal expenditure growth do not cause NGDP to permanently deviate from its targeted path.  Woodford notes that currently NGDP is anywhere from 10-15% below its trend (and thus expected) growth path.  Any increase in inflation under this target, therefore, would not be some ad-hoc temporary increase but part of a systematic approach that would return NGDP to its trend.  I have used the following figure before to illustrates this idea: 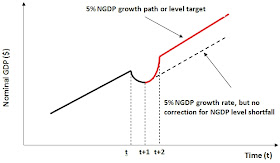 The black line has NGDP growing at a 5% annualized rate.  Then, at time t a negative aggregate demand (AD) shock causes NGDP to contract through time t+1.  There is now an a NGDP shortfall.  To make up for it, the Fed must actually grow NGDP  significantly faster than 5% to return aggregate nominal spending to its targeted level.  For example, if NGDP fell 6% between t and t+1 it is now 11% under its trend.  Next period the Fed must make up for the 11% shortfall plus the regular 5% growth for that period.  In short, the Fed would need to grow NGDP about 16% between t+1 and t+2 to get back to trend.  There might be temporarily higher inflation as part of the rapid NGDP growth, but over the long-run a NGDP level target would settle back at 5% growth.  Nominal and thus inflationary expectations would be firmly anchored...Woodford also notes that such a rule would actually tend to reduce AD shocks since it would create well-anchored nominal spending and nominal income expectations that wold prevent such a shock from materializing in the first place:3

A commitment not to let the target path shift down means that, to the extent that the target path is undershot during the period of a binding lower bound for the policy rate, this automatically justifies anticipation of a (temporarily) more expansionary policy later, which anticipation should reduce the incentives for price cuts and spending cutbacks earlier, and so should tend to limit the degree of the undershooting. Such a commitment also avoids some of the common objections to the simple Krugman (1998) proposal that the central bank target a higher rate of inflation when the zero lower bound constrains policy.