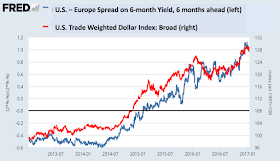 1 I calculate this 6 month interest rate, 6 months ahead as follows.
Using the expectation theory of interest rates, we know that

The Fred database has data for the left hand side of the equation (2) for both the United States and the Eurozone. So that we can calculate the following spread:

which, according to (2), is equal to the following;

Since the 6-month yield, 6-month ahead term premium should be fairly similar for the two regions, this term drops out and leaves us with the desired spread: