Nominal Spending Then and Now

Is it really that hard for monetary policy restore total current dollar spending to trend?  As an advocate of nominal GDP level targeting, I certainly believe the Fed is capable of such a task and have been making the case for sometime.  Skeptics, however, typically throw out some version of the Fed "pushing on a string" argument as a rebuttal. While appealing, this view ignores the best data point we have on this question: the Great Depression.  As is well known, nominal spending fell in half during this time and slowly recovered during the decade. As is also well known, FDR's monetary easing--devaluing the gold content of dollar and not sterilizing gold inflows--and the nominal expectations it created were key to restoring nominal spending.  The recovery path was not perfect, but eventually total current dollar spending returned to its pre-Great Depression trend as seen in the figure below: 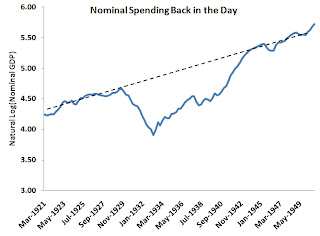 This is a remarkable accomplishment given the dire circumstances of the 1930s.  Note that full employment was restored without the unleashing of hyperinflation or any of the other concerns raised by critics of monetary stimulus.  So why can't the same happen today?  Why is it that instead of having a figure like the one above where nominal spending returns to trend we instead get the following one? 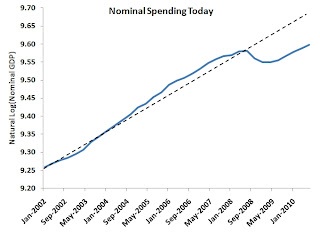 Posted by David Beckworth at 2:41 PM