Fed Chairman Ben Bernanke gave one of his better speeches last Friday night. In it, he explained why long-term interest rates have declined over the past four years and, in so doing, provided an important rebuttal to the popular view of the Fed as the great enabler of the large government deficits. The evidence Bernanke presented in his speech should give any honest proponent of the Fed as the great enabler (FGE) view pause. Unfortunately, this speech has not received the attention it deserves and many of the FGE proponents probably missed it.1 Therefore, it is worth reviewing and elaborating on this important speech.

Chairman Bernanke began by his speech by observing that both nominal and real long-term interest rates on safe sovereign debt have been declining across the world, not just in the United States. Here, for example, is his chart showing the global decline in real interest rates on government bonds: 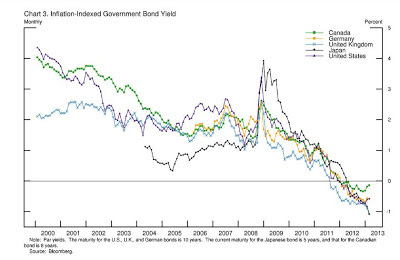 What is striking about this figure is that there is both a sudden, downward shift in trend beginning in 2008 and a narrowing of spreads among these interest rates. This pattern is also evident in long-term nominal yields, as I noted last year. These figures alone undermine FGE claims since they indicate something global in nature is affecting all these yields in a similar manner. Blaming the Fed for the low, long-term interest rates ignores this global phenomenon. 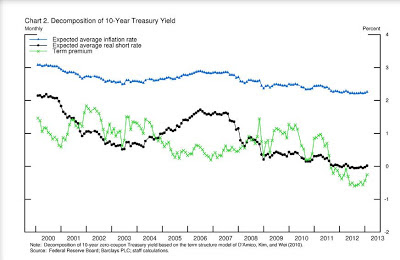 With this decomposition, Bernanke notes that most of the the 10-year treasury decline over the past four years comes from a decline in the expected average real interest rate and the term premium.

On the former, Bernanke correctly observes that though the Fed can directly influence the expected path of short-term real interest rate over the short-to-medium term, its influence beyond that is muted by real factors. In other words, the expected average real short-term yield over the next 10 years is shaped more by the economic outlook than by the Fed2.

On the later, Bernanke attributes the term premium's decline to three things: increased interest rate certainty because of the zero lower bound (makes it easier to forecast), the safe asset shortage problem, and the Fed's large scale asset purchases (LSAPs). The first two of these developments are result of the crisis. Only the LSAPs are the Fed's doing. So most of the factors driving down the 10-year treasury yields have been developments outside the Fed. This is consistent with the pattern of safe asset yields falling across the world. It is hard to find support for the FGE view here.

There is more Bernanke could have said about the LSAPs. First, contrary to the claims of many FGE proponents, the LSAPs have not been terribly large in relative terms. The stock of marketable treasuries went from about $5.13 trillion at the end of 2007 to $11.27 trillion at the end of 2012.  Over this same time, the Fed’s holding started near $0.74 trillion and reached $1.65 trillion. The Fed’s net gains, then, are approximately $0.94 trillion over this time compared to $6.14 trillion change in marketable debt. (The Fed actually has purchased a little more, but it also sold some securities in 2007.) The figure below shows the Fed's holding of marketable securities at the end of 2012: 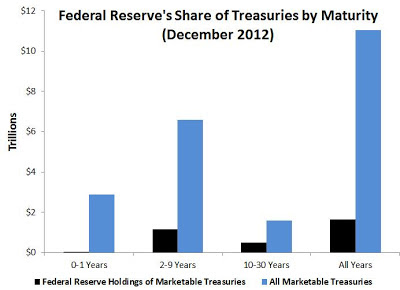 Relative, then, to the rise of total marketable debt the Fed’s holdings have not risen rapidly. In fact, the Fed now holds about 15% of marketable treasuries, roughly the same share it has held over the past few decades. Some FGE observers like to point out the Fed purchased 77% of marketable treasuries in 2011.3 What they ignore is that the Fed also sold off a sizable portion in 2007, leaving the Fed's overall share of treasuries about the same. Therefore, the large run up in in U.S. public debt has funded largely by individuals, their financial intermediaries, and foreigners. Blame them, not the Fed, for enabling the large budget deficits. 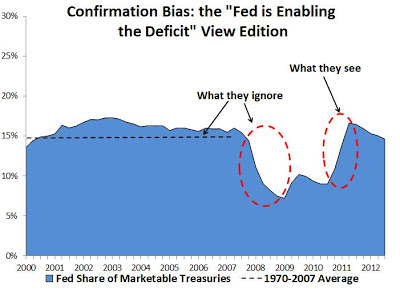 Second, the LSAP actually stopped with the end of QE2 in mid-2011 and did not resume until late 2012 with QE3. During that time, when the Fed's treasury holdings were relatively stable, real interest rates on 10-year treasuries continued to fall. How do FGE proponents explain this development? It is easy to explain if one looks to the other factors Bernanke listed as being important determinants of the long-term interest rates.

Third, even with the advent of QE3 and its $85 billion treasury purchases per month, it is unlikely the Fed will see its share of treasuries grow to the point where one can say the Fed is truly engaged in financial repression. Here is why. The Fed's QE3 purchases can be viewed as the Fed simply increasing the supply of the monetary base to match the demand for it. To the extent the Fed overshoots--and the FGE proponents are correct--then inflation will rise and force the Fed to reverse itself since QE3 is conditional on explicit inflation thresholds being hit. If the Fed does not hit these thresholds (and assuming no positive supply shocks that create downward pressure on inflation), then the Fed's treasury purchases will simply be accommodating growing monetary base demand. And if that is the case, the economy will still be weak leading to more budget deficits and a relatively stable share of treasury holdings for the Fed.

So far from being the great deficit enabler, the Fed's policies are actually playing catch up with soaring liquidity demand. And on that point the Fed can be held accountable for not doing enough, but that is subject of my next post.

1Noteable exceptions include Joe Weisenthal, Jim Hamilton, and Ryan Avent.
2In other words, the natural real interest is low and the actual real interest rate is reflecting that.
3According to this data, the number is actually 61%, not 77%.

Update:  Below is total marketable treasuries and the Fed's share in dollars. 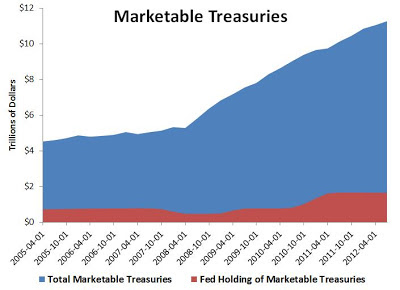 Posted by David Beckworth at 1:52 PM