The Tapering Talk and Rising Yields Are a Sign of Recovery

There seems to be a growing consensus that the recent rise in long-term interest rates is the result of the Fed indicating it may taper its asset purchases. Fed Chairman Ben Bernanke's comments before Congress on May 22 and the subsequent release of FOMC minutes allegedly sparked concerns the Fed was going to tighten policy sooner than expected. This understanding is reflected in this Bloomberg article:

Bond prices have slumped since Bernanke told Congress’s Joint Economic Committee on May 22 the Fed could scale back stimulus efforts “in the next few meetings” if the employment outlook shows “sustainable” improvement. He stressed that any decision would depend on what the economic data showed and that a move to reduce the pace of purchases would be delayed if recovery falters and inflation falls further.

The yield on the 10-year Treasury note was 1.93 percent the day before the committee hearing and went on to trade at a 14-month high of 2.29 percent last week...The sell-off in Treasuries has triggered convulsions in capital markets elsewhere...“Central banks have given a sense of near total control, driving volatility and bond yields to historic lows and compressing risk premia,” said Michala Marcussen, global head of economics at Societe Generale SA in London. As the “countdown” to the end of the Fed’s quantitative-easing program advances, “volatility and higher bond yields are making a return.”

This is very compelling narrative, except that it is probably wrong. This popular view is so caught up in what Bernanke said that it is missing the forest for the trees. Other developments have been happening to long-term yields that suggest the tapering talk is a red herring. These can be seen in the next few figures.

First, long-term interest rates started increasing at the beginning of May. Bernanke's comments and the FOMC minutes occurred several weeks later. Therefore, the timing is way off for the tapering explanation. Something else is happening here: 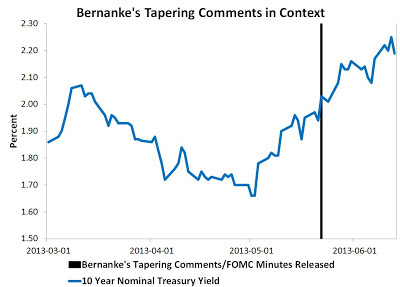 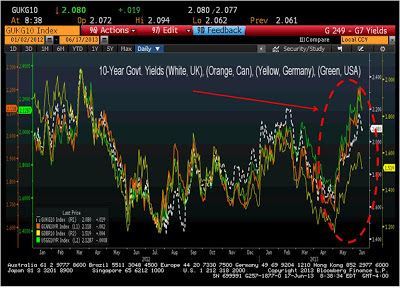 So what could be affecting all these yields over the past few months? How about an improved economic outlook? We are now halfway through 2013 and the U.S. economy has been relatively resilient to fiscal austerity and Japan's first quarter growth has been better than expected. Maybe investors see these developments and are becoming increasingly more confident. If so, they would be rebalancing their portfolios accordingly and, in the process, driving up the natural rate of interest. This possibility is a point that Market Monetarists like Lars Christensen have been making for some time.


Note the implications of this understanding. If monetary policy does spark a robust recovery it should lead to higher interest rates, not lower ones. Higher yields mean, then, that QE3 is working. Chairman Bernanke made this very point at a prior congressional hearing:

Earlier this year, Chairman Bernanke made the point that rising interest rate reflect “The fact that interest rates have gone up a bit is actually indicative of a stronger economy,” Bernanke said in Washington today in response to questions from members of the House Financial Services Committee. That indicates the Fed’s stimulus is working, he said.

It also means that most observers have misinterpreted Bernanke's remarks on tapering. For him to even consider tapering implies he believes a solid recovery may be finally taking hold. But, by his own admission, a solid recovery means higher interest rates. Commentators, therefore, should be viewing his tapering talk and higher yields as a sign of progress, not as a sign of Fed tightening. 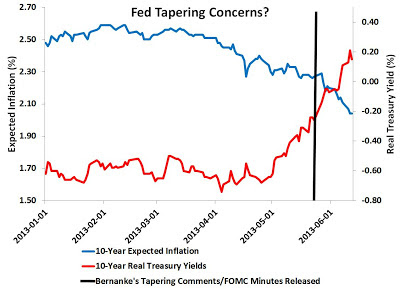 Here too there is a benign explanation for these developments: a positive supply shock. As Ryan Avent explains, there appears to have been some growth in global productive capacity. One example would be the increased oil production in the United States. Positive supply shocks like this tend to put upward pressure on the natural interest rate and downward pressure on inflation. If this assessment is correct, then we need not worry about the declining inflation as noted by Lars Christensen.

Of course, the U.S. economy is a long way from full employment and the short-term natural interest rate may still be below zero. But these developments should give us pause and force us to recognize that once a strong recovery takes hold, we should eagerly anticipate rising interest rates.  Embrace the rates!

P.S. Count this post as my long-overdue second part of my Bernanke Friday Night Special Part I.
Posted by David Beckworth at 3:14 PM