The blogosphere is once again talking about Canada's successful fiscal austerity in the mid-to-late 1990s. Paul Krugman rekindled the conversation with this statement:

[L]ook at everyone's favorite example of successful austerity, Canada in the 1990s. Canada came in with gross debt of roughly 100 percent of GDP, roughly comparable to Greece on the eve of the financial crisis. It then proceeded to do a pretty big fiscal adjustment -- 6 percent of GDP according to the IMF's measure of the structural balance, which is about a third of what Greece has done but comparable to other European debtors. But unemployment fell steadily. What was Canada's secret?

Ramesh Ponnuru and I have argued numerous times that Canada's secret was a monetary policy offset. That is, monetary policy eased to offset the drag of fiscal tightening. Paul Krugman agrees in the above post. The evidence that we and others have pointed to in support of this view is the Bank of Canada cutting its target interest rate more than 500 basis points between 1995 and 1997.


Some of our conservative and libertarian friends, however, are not convinced by this evidence. David Henderson and Robert Murphy, in particular, have pushed back against this view. They contend there was no monetary offset. Henderson questions how much influence the Bank of Canada actually has over interests rates. Murphy goes further and provides a list of data points that he claims show the Canadian success story did not rely on loose money. So are Henderson and Murphy's skepticism of the monetary offset warranted? 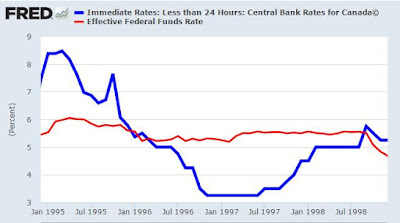 Again, over the long-run the fundamentals will kick in and cause these two interest rates to follow a similar path. Henderson and Murphy assume this long-run relationship will also hold in the short-run. But it does not as shown above. The evidence, then, points to the Bank of Canada exogenously lowering short-term interest rates during the period of fiscal tightening.

I must say I was surprised to see an Austrian like Murphy makes this argument. Any Austrian worth his salt believes central banks can and do manipulate short-term interest rates. To go from this traditional Austrian position to one above is hard to reconcile. Put it this way: Murphy's reasoning, if consistently applied, would lead one to accept Bernanke's saving glut theory for the low interest rates during the housing boom. But Murphy does not accept this view. So it is hard to understand why he would suddenly embrace this emasculated view of central banks.


Murphy does attempt to provide other evidence to support his view on the Canadian austerity experience. It is impossible, though, to draw conclusions from his evidence because he does not provide the proper context for evaluating it. For example, one cannot simply look at the growth rates over a few years of the monetary base and nominal GDP as Murphy does and conclude with certainty whether monetary policy was tight or loose. Instead, one has to evaluate them against what was expected by the public and or desired by the central bank. 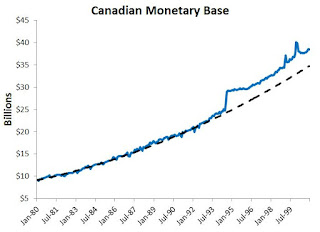 Next, let us look at nominal GDP in the figure below. It shows the nominal GDP relative to its trend path. 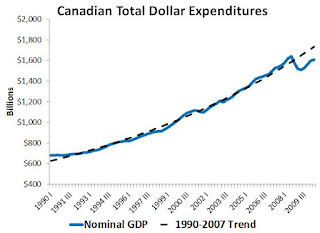 Note that nominal GDP follows its trend path rather closely during the period of fiscal austerity. The Bank of Canada, in other words, did what was necessary to keep aggregate demand on a stable growth path during this time. Given the evidence shown above, the Bank of Canada offset the fiscal tightening via lower interest rates and a permanently higher monetary base path. This story is completely missed by Murphy's cursory look at nominal GDP growth rates over a few years. So yes, monetary policy did offset fiscal austerity in Canada in the mid-to-late 1990s.

The policy implications from this experience are clear. Economies undertaking fiscal austerity are best served by expansionary monetary policy. It provides a viable path to obtaining a more sustainable debt level. The ECB, however, tightened monetary policy twice during the Eurozone crisis. Given the one-size-fits-all approach problems, this tightening proved excessive for the periphery countries and helped spawn the soveriegn debt crisis. Just imagine how different the Eurozone would be today had the ECB began its QE program back in 2008.
Posted by David Beckworth at 2:00 PM