The Big Lesson of the Eurozone Crisis

Paul Krugman notes that Eurozone crisis is a vindication of that optimum currency area (OCA) theory. I agree but would note the crisis also sheds light on the specialization versus endogeneity debate surrounding the OCA criteria. Interestingly, Krugman himself wrote some of the literature in this debate back in the early-to-mid 1990s.

So what is the specialization versus endogeneity debate? To answer this question, first recall that the OCA theory says members of a currency union should share similar business cycles, have economic shock absorbers (fiscal transfers, labor mobility, and price flexibility) in place, or some combination of both. Similar business cycles among the members of a currency union mean a common monetary policy will be stabilizing for all regions. If, however, there are dissimilar business cycles among them a common monetary policy will be destabilizing unless these regions have in place economic shock absorbers. This understanding can be graphically represented as follows: 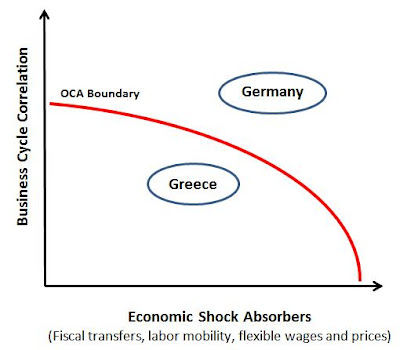 Okay, those are the basics of the OCA theory. A question that emerged from this theory is whether a country like Greece that did not originally meet the OCA criteria could eventually do so. There were two answers to this question which led to the specialization versus endogeneity debate in  the OCA literature as noted by Mongelli (2002):

[W]hat type of forces might monetary unification unleash? Looking ahead, we may be confronted with two distinct paradigms -- specialisation versus “endogeneity of OCA” -- which have different implications on the benefits and costs from a single currency...

The first paradigm is the “Krugman specialisation hypothesis” that is based upon the “Lessons of Massachusetts” i.e., the economic developments experienced by the US over the last century (Krugman (1993) and Krugman and Venables (1996)). This hypothesis is rooted in trade theory and increasing returns to scale as the single currency removes some obstacles to trade and encourages economies of scale. It postulates that as countries become more integrated (and their reciprocal openness rises) they will also specialise in the production of those goods and services for which they have a comparative advantage... Members of a currency area would become less diversified and more vulnerable to supply shocks. Correspondingly their incomes will become less correlated...An increase in integration would move a country away from the OCA line...

The second paradigm is the “endogeneity of OCA” hypothesis... The basic intuition behind this hypothesis is that... [if] countries join together and form a “union,” such as the European Union (EU), both trade integration and income correlation within the group will rise: i.e., they will gradually move to... the right of the OCA line. This point carries important implications. A country’s suitability for entry into a currency union may have to be reconsidered if satisfaction of OCA properties is endogenous or “countries which join EMU, no matter what their motivation may be, may satisfy OCA properties ex-post even if they do not ex-ante!” (Frankel and Rose 1997).

In terms of the above figure, these two competing views can be drawn as pushing Greece either toward the OCA boundary or away from it. 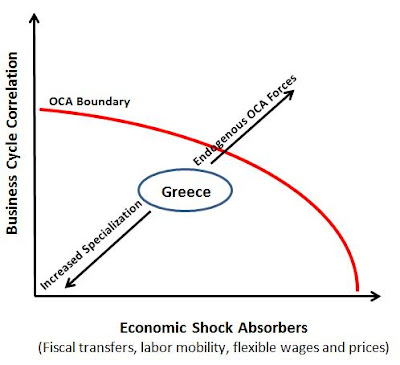 The endogenous view of the OCA criteria fed right into what Lars Christensen calls the fatal conceit of Eurozone planners. It provided an ex-ante justification for believing all would work out well in this grand monetary experiment. The specialization view, on the other hand, was par for course with the tendency among American economists to be pessimistic about its success.

We all know now which view was right. Greece did not over time become better suited to be a part of the Eurozone.  And relative to Germany, many of the periphery countries, including Greece, became more specialized as seen in the figure below. This figure is constructed by looking at the agricultural, industry, manufacturing, and service shares of Eurozone economies relative to Germany and seeing how this ratio change over time. 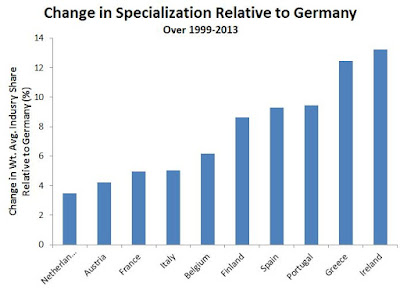 More sophisticated evidence suggests that at a minimum the periphery economies failed to further diversify after joining the Eurozone. So the great hope of Eurozone countries like Greece endogenously conforming to OCA criteria never happened. If anything, joining the Eurozone pushed Greece and the periphery further away from the OCA boundary. So probably the biggest lesson of the Eurozone crisis is to take the OCA criteria seriously before joining a currency union.
Posted by David Beckworth at 11:03 AM