Are all the problems in the U.S. economy nominal?  Robert Gordon implicitly says no in a new paper on the long-run outlook for U.S. productivity (hat tip Reihan Salam).  He makes the case that rapid productivity gains from 1995-2005 will not persist going forward:

The 20‐year period 1987‐2007 combines the inexplicably slow productivity growth of 1987‐95, the temporarily ebullient period 1995‐2000, and the interesting 2000‐07 period that in some dimensions looks like more normal behavior.  The seven years between 2000:Q4 and 2007:Q4 were neatly divided in half, with extremely rapid productivity growth between 2000:Q4 and 2004:Q2 (2.68 percent), and much slower growth from 2004:Q2 to 2007:Q4 (1.36 percent), averaging out to 2.02 percent for the seven‐year interval.   As argued above the productivity growth “explosion” of 2001‐04 rested on a combination of savage corporate cost cutting and delayed learning from the internet revolution.  Once profits had recovered the pressure for cost cutting disappeared, and eventually the delayed learning subsided as well.
[...]
The paper approaches the task of forecasting 20 years into the future by extracting relevant precedents from the growth in labor productivity and in MFP over the last seven years, the last 20 years, and the last 116 years.  Its conclusion is that over the next 20 years (2007-2027) growth in real GDP will be 2.4 percent (the same as in 2000‐07), growth in total economy labor productivity will be 1.7 percent...

So over the next two decades Robert Gordon sees labor productivity growing at annual average rate of 1.7% compared to about 2.5% for 1995-2004.  If his view is widely held then that means firms will expect lower returns to investment and household will expect lower incomes.  Such lower expectations, in turn, would translate into lower investment and consumer demand today.  This, then, may account for some of the prolonged slump.

So is Gordon's view widely held?  Is the forecast for productivity falling?  The Quarterly Survey of Professional Forecasters can answer these questions.  It asks forecasters what they expect the average annual productivity growth rate to be over the next 10 years.  The data starts in 1992 and is at an annual frequency.  Here is a figure of the data: 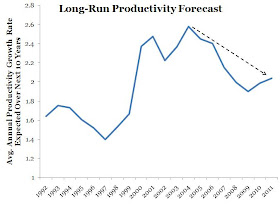 So yes, the consensus forecast is that productivity growth is expected to decline over the next 10 years.  It is hard not to look at this figure and conclude at least some of the ongoing slump can be attributed to it.  However, this does not necessarily mean it is the most important factor.  And I do not think it can be because we do not see a sustained uptick in the inflation rate, something that should be present if the permanently lower productivity growth rate were the main culprit.  Rather we see muted inflation since 2007 with the core inflation rate actually falling, something far more consistent with a large amount of insufficient aggregate demand.   And there is the negative output gap.  I still believe that the failure by the Fed to return nominal spending to its pre-crisis trend is the most important reason for shortage of aggregate demand.

Update:  Bill Woolsey notes that the lower expected productivity growth should only affect real variables but have no bearing on nominal expenditures if properly stabilized.
David Beckworth at 3:36 PM
Share