What Really Caused the Crisis?

I was looking at some employment data and was reminded of this figure: 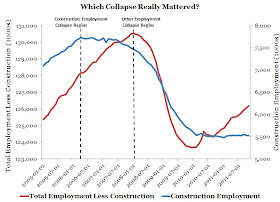 This figure shows that construction employment reached a peak in April, 2006 and started descending thereafter.  The housing recession was on, but remarkably employment in the rest of the economy continued to grow through early 2008.  In fact, layoffs and discharges did not dramatically change during this almost 2-year period as seen below: 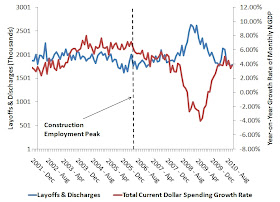 In other words, the Great Recession did not emerge because of the collapse of the housing market in early 2006.  Something else had to happen about 2 years later to turn a sectoral recession turn into the Great Recession.  As the figure above suggests, I see the evidence pointing toward a failure by the Federal Reserve to stabilize nominal spending and by implication nominal income. This failure meant that nominal income growth expectations of about 5% a year assumed by household and firms when they signed nominal debt contracts would not be realized.  A debt crisis was therefore inevitable.

This understanding is corroborated by the data on personal income. The figure below shows that despite the fall in the growth rate of personal income from construction and real estate services that began in early 2006, personal income in the rest of the economy continued to grow at about 5% a year up through mid-2008.  The Fed was able to stabilize nominal incomes overall for almost two years while structural changes were taken place in those sectors closely tied to the housing boom. 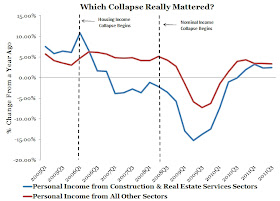 This stabilization between early 2006 and mid-2008 was no small feat given the problems in the financial system.  The figure below shows that the rise in financial distress in mid-2007, as indicated by the Ted Spread, did not stop the nominal GDP from growing for about another year.  Again, a remarkable performance.  However, what this figure also shows is that once the Fed allowed nominal GDP to fall and made no effort to reverse it the financial crisis intensified.  Thus, the Fed's failure to act and prevent the fall in nominal income meant, just as it did during the Great Depression, a systematic financial crisis was going to happen. 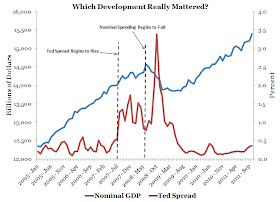 This is an argument I and others have made many times before, but it is worth repeating. It is also a story that can be told for the Eurozone crisis. Another way of saying this is that central banks are just as responsible for passive tightening as they are for active tightening.  They should be held accountable for both.
David Beckworth at 3:54 PM
Share