How Consequential Was the Fed Tightening in 2008?

So Senator Ted Cruz's claim that Fed policy was too tight in 2008 and my ringing endorsement of it has generated some interesting conversations. Paul Krugman says I should taper my enthusiasm, while Scott Sumner and Ramesh Ponnuru say it is okay. The Washington Examiner and Quartz seem to agree.

Other observers like Kevin Drum, Jeff Spross, Cullen Roche, and Sudeep Reddy are underwhelmed by Senator Cruz's critique.They acknowledge the Fed should have cut interest rates at its August and September 2008 FOMC meetings, but they question how consequential this inaction was to the Great Recession. After all, the Fed could only cut interest rates from 2% to 0% during this time.

This rather benign assessment of Fed policy in 2008 misses an important point. The Fed's tightening of monetary policy was not just about a failure to cut short-term interest rates from 2% to 0%. It was also about the Fed signalling it would raise interest rates going forward because of inflation concerns. The Fed, in other words, was tightening the expected path of monetary policy during this time. 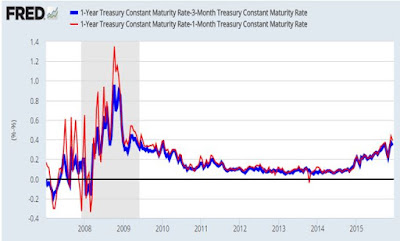 The second figure shows the 3-month treasury bill interest rate forecast from the Philadelphia Fed's Survey of Professional Forecasters. It compares 1-quarter, 2-quarters, 3-quarters, and 4-quarters ahead forecasts for the second and third quarters of 2008. It clearly shows at every forecast horizon that professional forecasters raised their forecasts of short-term interest rates between the second and third quarter of 2008. They expected more monetary policy tightening in the third quarter 2008. 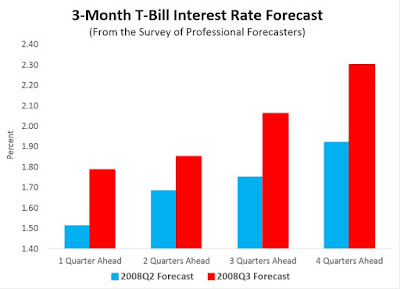 Again, the Fed tightening in 2008 was not just about the absence of a 2% interest rate cut. It was about an expectation that the Fed was going to raise rates going forward, even though the economy was weakening. This development was huge because current spending decisions are shaped more by the expected path of interest rates than by current interest rates.

So why did the public expect this tightening? Because the Fed was signalling it! Among other places, this signalling was clear in the August and September 2008 FOMC statements. Here is a gem from the August FOMC meeting (my bold):

Although downside risks to growth remain, the upside risks to inflation are also of significant concern to the Committee.

And from the September FOMC meeting we get a similar warning:

This was forward guidance at its worst and points to a far more intense tightening cycle than is apparent by looking only at the current policy interest rate. The Fed was willing to strangle the already weak economy over inflation concerns and the market knew it.

It was this severe tightening of monetary policy that turned an otherwise ordinary recession into the Great Recession. As I noted before, this tightening of policy occurred before the worst part of the financial crisis in late 2008.  Recall that  many of the CDOs and MBS were not subprime, but when the market panicked in late 2008 a liquidity crisis became a solvency crisis for all. Had the Fed not tightened during the second half of 2008 the financial panic probably would have been far less severe and the resulting bankruptcies far fewer. So no, it is not obvious that a severe financial crisis was inevitable.

P.S. The Fed was not the only central bank to tighten in 2008 because of inflation concerns. The ECB did as well and repeated the mistake two times in 2011. These experiences illustrates the the limits of inflation targeting and why it is a monetary regime that has outlived its expiration date.