The BIS Wants to Put the Cart Before the Horse.

The Bank for International Setttlements (BIS) released its annual report today. It calls for central banks in advanced economies to begin tightening monetary policy to ward off the buildup of financial imbalances. This is great advice if it were 2002. But it is 2014 and advanced economies are still fragile. Raising interest rates now, as Ryan Avent notes, would choke off the feeble recovery and create the very financial instability the BIS fears.

This tension between what the BIS wants monetary authorities to do and the consequences of doing so is evident in the annual report. For example, observe the contraction between these two excerpts from chapter five of the report (my bold):

Over the past 12 months, nominal and real policy rates remained very low globally, and central bank balance sheets continued to expand up to year-end 2013...This extraordinary policy ease has now been in place for about six years... 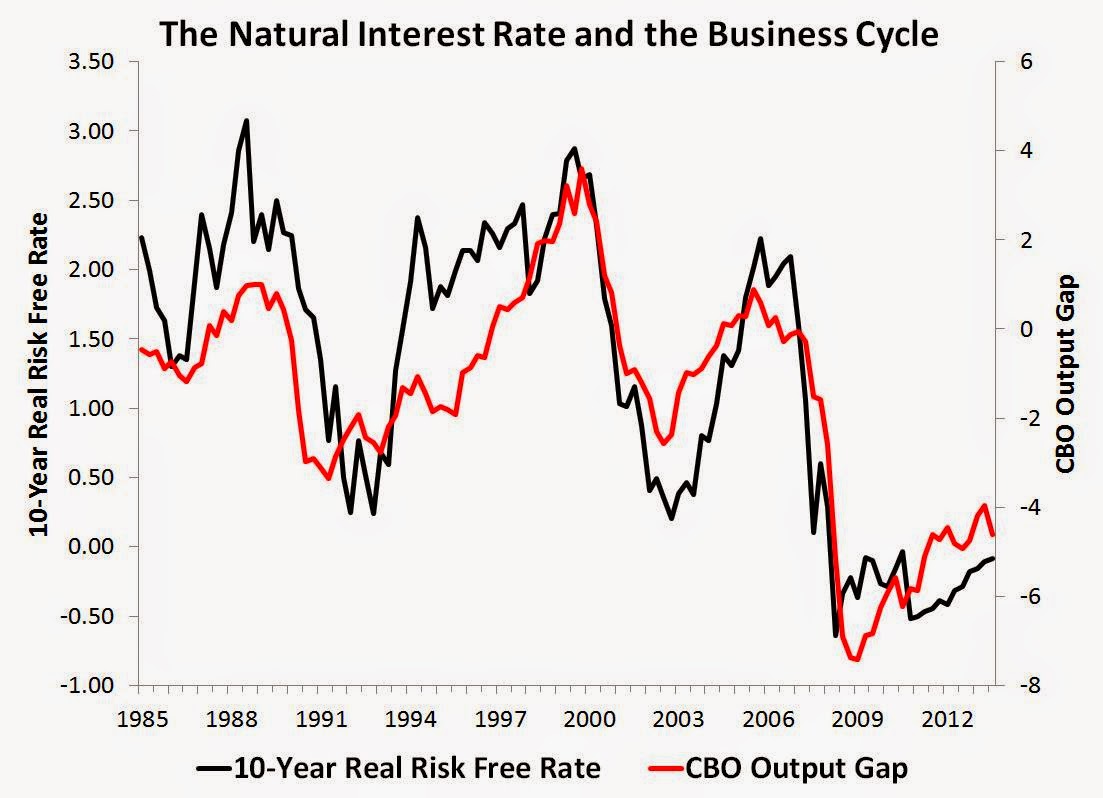 We all want more robust economic growth. But raising interest rates before the economy recovers is putting the cart before the horse.

1This measure is constructed by subtracting the 10-year expected inflation and the 10-year term premium from the 10-year nominal treasury yield. The term premium is an average of the Kim-Wright data and the Adrian, Crump, and Moench data.

What Matters More: the ZLB or Debt Deleveraging?

Must private-sector debt crisis necessarily lead to sharp recessions? Are impaired household balance sheets the reason for the Great Depression, the Great Recession, and the Eurozone crisis? For many observers the answer is an unequivocal yes. People acquired mortgages based on unrealistic expectations about future income streams from housing. They, therefore, overestimated the present value of their homes and took on too much debt. When these expectations failed them, they were forced to deleverage and the resulting drop in aggregate spending ushered in the Great Recession. This view is both intuitive and widely held. But is it complete? Or does it miss a deeper, more important story?

These are the questions I discuss in my review of Atif Mian and Amir Sufi's new book, House of Debt, in the July 7 print edition of the National Review. Here is an excerpt:

Recall that for every debtor there is a creditor. That is, for every debtor who is cutting back on spending to pay down his debt, there is a creditor receiving more funds. The creditors could in principle provide an increase in spending to offset the decrease in debtors' spending. But in the recent crisis, they did not. Instead, households and non-financial firms that were creditors increased their holdings of safe, liquid assets. This increased the demand for money. This problem was exacerbated by the actions of banks and other financial firms. When a debtor paid down a loan owed to a bank, both loans and deposits fell. Since there were fewer new loans being made during this time, there was a net decline in deposits [and thus] in the money supply. This decline can be seen in broad money measures such as the Divisia M4 measure. These developments—increase in money demand and a decrease in money supply—imply that an excess money-demand problem was at work during the crisis.

The problem, then, is as much about the excess demand for money by creditors as it is about the deleveraging of debtors. Why did creditors increase their money holdings rather than provide more spending to offset the debtors? ...Mian and Sufi do briefly bring up a potential answer: the zero percent lower bound (ZLB) on nominal interest rates.

Here is another way of seeing the importance of the ZLB problem. The present value of housing is affected by both the expected income streams it will earn as well as the interest rate at which they get discounted. The debt deleveraging story focuses on the fall in the expected income stream, the numerator. The ZLB problem focuses on the lack of offsetting fall in the interest rate, the denominator. Had the interest rates been allowed to reach their negative market clearing (or 'natural') interest rate level, then the present value of housing would not have fallen as much. Household balance sheets would not have been impaired so badly and there would have been less need for deleveraging. In short, there would been no Great Recession but only a ordinary, mild one. So again, the ZLB really is the deeper story here.

P.S. There are ways for policymakers to get around the ZLB and hit the natural interest rate level. So even though it was the deeper story, it is not insurmountable. But these approaches are politically difficult, especially for a central bank that has exhausted its political capital on bank bailouts and make-it-up as go along QE programs. If only the Fed had spent more of its capital on one of these approaches early on.
Posted by David Beckworth at 10:45 PM 18 comments:

Tinkering on the Margins: ECB Edition

Has the ECB finally ended its hard-money ways? You know the kind that raises interest rates twice during the crisis, allows aggregate demand in the periphery to stall, and fosters below-trend growth in money supply and money velocity. On Thursday, the ECB said it would be taking bold steps to stabilize the economy. It would start charging banks for the privilege of depositing their funds at the ECB, commence a new long-term lending program of €400 billion, quit sterilizing its bond purchases, and begin preparing for a QE program. That is quite a list, right? Many commentators are making much ado about the first item since it means a major central bank will begin targeting a negative nominal interest rate. Finally, a central bank who does not fear the zero lower bound!

So does this mean the ECB has finally gone all-Abenomics on us and unleashed both barrels of the gun? Sadly, the answer is no. Its new actions will not fundamentally alter the path of aggregate demand in the Eurozone for one key reason: there has been no regime change. The ECB did not change its inflation target. Should the ECB's new programs threaten to push inflation a tad too high expect it to tighten policy like it did in 2011. This point was made very clear by Mario Draghi in the ECB press conference :

“Meanwhile, inflation expectations for the euro area over the medium to long term continue to be firmly anchored in line with our aim of maintaining inflation rates below, but close to, 2%. Looking ahead, the Governing Council is strongly determined to safeguard this anchoring."(HT Lars Christensen)

In other words, these policies at best raise inflation from its current low level to somewhere between 1% and 2%. That is not enough to close the aggregate demand shortfall. This is an important point. It means that even if there were further fiscal integration in the Eurozone and more active fiscal policy, such as helicopter drops, it would have little effect on the economy. The ECB would quickly offset any program that began to meaningfully raise inflation. It would cut short any robust recovery.

There has to be, however, a period of catch-up aggregate demand growth and by implication, temporarily higher inflation for a recovery to take hold in the Eurozone. This requires a commitment by the ECB to a permanent, non-sterilized monetary injection, the kind done by Japan under Abenomics and by Israel under Stanley Fisher. (No, the kind done under Ben Bernanke is not expected to be permanent and is a key reason for the sluggish recovery.)

The Germans should understand that were the ECB to allow a temporary period of catch-up inflation it does not mean long-run inflation expectations have to become unmoored. It does mean, though, the ECB would need to do something like a price-level or NGDP-level targeting. Level targeting is the kind of regime change that would fundamentally change the path of Eurozone aggregate demand since it allows for catch-up growth. It seemed to have worked for Israel during the crisis and should do wonders if tried in Europe.


In terms of the specific proposals, it is interesting to see the ECB try negative interest rates. In theory, it makes sense: move market interest rates closer to the negative natural interest rate and markets will begin clearing. And contrary to many observers claims, the mechanism for this process is not just about forcing banks to lend. It is more about incentivizing depositors on the margin to spend their money balance instead of holding them in the bank. The idea is that the banks will pass the ECB's charge on to their customers and spur a recovery in nominal spending.


That is a compelling theory except for this problem:

Currency holdings have grown dramatically in the Eurozone and would grow even more if individuals started getting charged for their deposits. This is the zero lower bound (ZLB) problem: individuals would rather hold cash and earn 0% than hold bank accounts and earn a negative interest rate. So for all the buzz about the ECB targeting a nominal interest rate, it still has failed to solve the ZLB problem. There are ways to solve this problem without getting rid of currency. But so far the ECB has not been willing to try them.

In short, the ECB's new programs amount to nothing more than tinkering on the margins. Unfortunately, this means more sluggish aggregate demand growth and more human suffering.


P.S. Below is a figure showing currency as a percent of M3 less currency. It reveals a sharp drop in the currency holdings during the transition to the Euro that later returns to trend. Once the Euro crisis starts the ratio starts rising. Expect it to rise more.