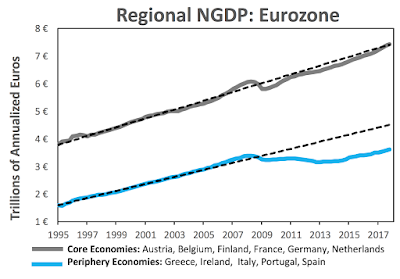 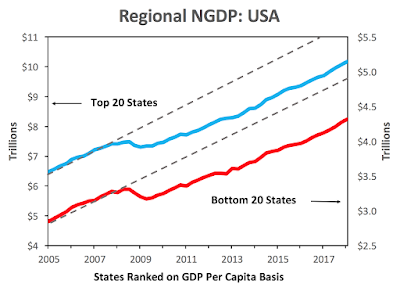 Moreover, this outcome suggests there are more effective regional shocks absorbers in the United States that make the dollar zone more of an OCA than the Eurozone. That is, even if Fed policy is not optimal for all regions of the United States this is less of a problem than in Europe because the regions can better handle bad monetary policy via fiscal transfers, labor mobility, safer retail banking system, flexible prices, etc. For more on these shock absorbers see my other recent post on this topic.
Posted by David Beckworth at 7:03 PM 3 comments:

Will Australia Be the First Country to Try NGDPLT?

There is a new Brookings paper by Warwick J. McKibbin and Augustus J. Panton titled Twenty-five Years of InflationTargeting in Australia: Are There Better Alternatives for the Next 25Years? Here is how they answer the question in their title:

Put differently, this Brookings paper argues that inflation targeting is a monetary regime whose time has come and gone. I completely agree.

What is interesting, though, is that they are making this case for Australia whose economy has had a remarkable 27-year expansion. This is attributable, in part, to the Reserve Bank of Australia (RBA) who has successfully navigated through numerous shocks including the bursting of the tech bubble, the global financial crisis, commodity price collapse, and periodic bouts of China panic. The last time there was a recession in Australia it was in the early 1990s.

Along these lines, it is worth highlighting again that Australia, if any country, should have experienced a so-called 'balance sheet' recession in 2008-2009. It had a housing boom and a surge in household debt that exceeded the United States as seen below. It also faced a large negative commodity price shock in late 2008-early 2009. And yet there was no Great Recession in Australia. 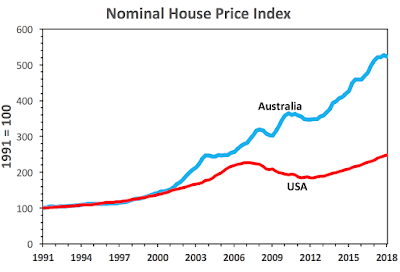 Australia, in short, was the balance sheet recession that never happened. The reason the Australian economy faired so well is because is because the RBA never hit the ZLB and, in so doing, kept aggregate nominal income on it trend growth path. Thus, there was less financial stress created for nominal debt contracts holders. So, unlike the Fed and the ECB, the RBA saw its nominal GDP stay roughly on course during and right after the global financial crisis. And that made all the difference in the world.

This gets us back to the new Brookings paper. So why do the authors argue for an explicit nominal GDP level target (NGDPLT) when the RBA's inflation target has been implicitly doing the same? The authors argue that going forward the biggest shocks likely to hit the Australian economy will be large supply shocks:

There are three main areas where future shocks can be anticipated. The first is climate change and climate policy responses. The second is the emergence of a fourth industrial revolution or a new Renaissance due to the rapid adoption of new technologies such as artificial intelligence. The third is the growth of larger emerging economies into the world economy following the experience of China.

The authors note an explicit NGDPLT is better suited to handle such shocks and thus their call for the RBA to adopt it. I agree completely on the supply shock motivation. I would, however, submit another reason for the RBA to explicitly adopt a NGDPLT in Australia.

The RBA in the past has done a great job keeping nominal income on its trend growth path. However, in recent years it has actually slipped a bit and now it is now below trend. An flexible inflation target, apparently, is not enough to always keep aggregate demand growth stable. Moving to an explicit NGDPLT would put the focus on this emerging gap and force the RBA to take corrective actions. 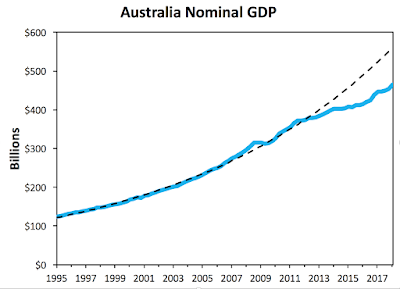 New Zealand was the first country to adopt inflation targeting. It was the avant-garde of this new monetary regime in the early 1990s. So maybe a smaller economy like Australia needs to do  same with NGDPLT before other larger economies try it. Here is hoping the RBA is willing to try it.
Posted by David Beckworth at 3:34 PM 6 comments: 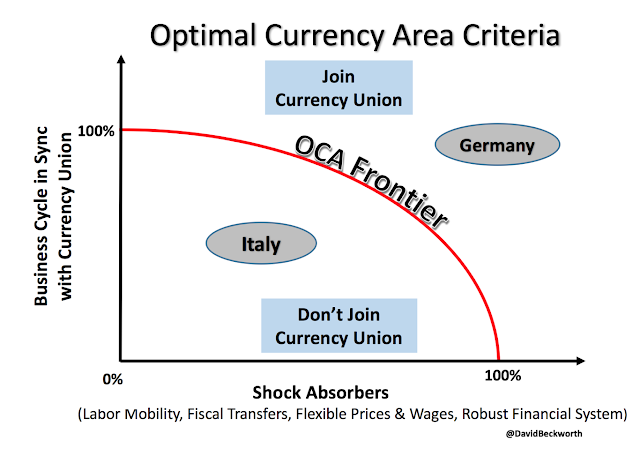