The strangest thing is that Ben Bernanke agrees with Sumner on this point. Just today we learn of his written reply to a Brad DeLong question on why the Fed has not adopted an explicit 3% inflation target (something that would have done wonders to prevent the great nominal spending crash of late 2008, early 2009):

...The Federal Reserve has not followed the suggestion of some that it pursue a monetary policy strategy aimed at pushing up longer-run inflation expectations. In theory, such an approach could reduce real interest rates and so stimulate spending and output. However, that theoretical argument ignores the risk that such a policy could cause the public to lose confidence in the central bank’s willingness to resist further upward shifts in inflation, and so undermine the effectiveness of monetary policy going forward. The anchoring of inflation expectations is a hard-won success that has been achieved over the course of three decades, and this stability cannot be taken for granted. Therefore, the Federal Reserve’s policy actions as well as its communications have been aimed at keeping inflation expectations firmly anchored. [Emphasis added]

So Bernanke agrees with Sumner in principle but is afraid of inflation expectations becoming unmoored. A look at the average 10-year inflation forecast from the Survey of Professional Forecasters says Bernanke should not be worried about inflation expectations. They have been anchored relatively well since 1997 around 2.5 percent: 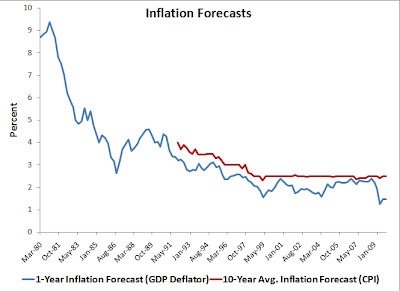 Too bad Paul Krugman was not beating his influential drum with a message of inflation targeting--or in my dream world nominal income targeting--over the past year or so. Maybe others would have joined in and forced Bernanke and the Fed to think more about this option. Krugman admitted recently it would have been the first-best economic solution to the current crisis, but avoided doing so because he thought it would be a second-best political solution. (He thought expansionary fiscal policy would be more politically feasible.) Even if Krugman and other observers have been pushing the unconventional monetary policy message more forcefully over the past year, it is still not clear the Fed would have responded. David Wessel in his new book reports that Bernanke came into the Fed wanting to target inflation. He faced, however, strong opposition and (unlike his predecessor) wanted to be a consensus builder at the Fed. He did not want to force his hand on the FOMC.

Update: Scott Sumner, Brad DeLong, Free Exchange, and Will Wilkinson comment on Bernanke's response.
Posted by David Beckworth at 11:27 AM