There has been a lot of discussion recently over the potential break-up of the Eurozone. Commentators such as Martin Wolf, Paul Krugman, and even the ECB have highlighted problems in some of the periphery nations of the Eurozone that could cause them to eventually abandon the Euro. As Krugman notes, this discussion is ultimately based on theory of the optimal currency area:

The basic idea is that there’s a tradeoff. Having your own currency makes it easier to make necessary adjustments in prices and wages, an argument that goes back to none other than Milton Friedman. As opposed to this, having multiple currencies raises the costs of doing business across national borders.

What determines which side of this tradeoff you should take? Clearly, countries that do a lot of trade with each other have more incentive to adopt a common currency: the euro makes more sense than a currency union between, say, Malaysia and Ecuador. Beyond that, the literature suggests several other things that might matter. High labor mobility makes it easier to adjust to asymmetric shocks; so does fiscal integration.

Some of Krugman's readers have been asking him what are the implications for the United States from this theory. I happen to have a paper [ungated version]that looks at this very question. In the paper I frame the issue this way:

Graphically, this understanding can be depicted as follows: 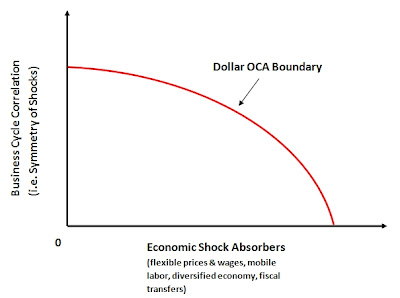 Along these lines, I explore in the paper how different state economies respond to a typical monetary policy shock for the period 1983-2008 and compare it to the response of the U.S. economy to that same shock. Comparing the state economies to the U.S. economy is useful since the U.S. economy is the target of monetary policy. To illustrate this exercise, I have graphed below how Texas and Michigan typically responded to such shocks over this time. The solid lines below represent the change to the real economy (measured by coincident indicator) after the monetary policy shock for each region while the dashed lines provide standard error bands which help provide a sense of precision. (Click on figures to enlarge.) 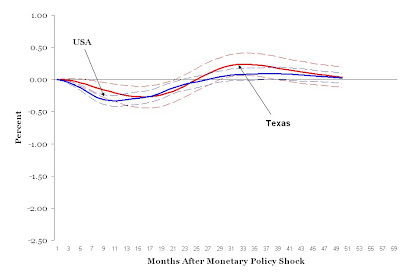 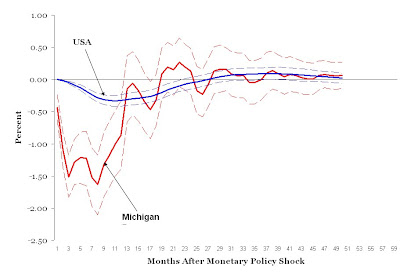 Note that relative to the U.S. economy, the Michigan economy gets hammered by the typical monetary policy shock while Texas does about the same. These disparate responses to U.S. monetary policy shocks suggests that some parts of the U.S. economy may not part of the dollar OCA. Based on this and other empirical evidence in the paper I conclude that the Rustbelt may have benefited from having its own currency. The U.S. economy, then, may not be after all the benchmark OCA case against which the European would want to measure themselves.
Posted by David Beckworth at 12:09 PM