Why the Surge in Commodity Prices?

[T]oday, as in 2007-2008, the primary driving force behind rising commodity prices isn’t demand from the United States. It’s demand from China and other emerging economies. As more and more people in formerly poor nations are entering the global middle class, they’re beginning to drive cars and eat meat, placing growing pressure on world oil and food supplies.

There are many observers who disagree with this interpretation.  They argue it is loose U.S. monetary policy and speculation that is driving the surge in commodity prices.  Krugman notes there is a way to test this alternative theory:

The last time the prices of oil and other commodities were this high, two and a half years ago, many commentators dismissed the price spike as an aberration driven by speculators. And they claimed vindication when commodity prices plunged in the second half of 2008.

But that price collapse coincided with a severe global recession, which led to a sharp fall in demand for raw materials. The big test would come when the world economy recovered. Would raw materials once again become expensive? 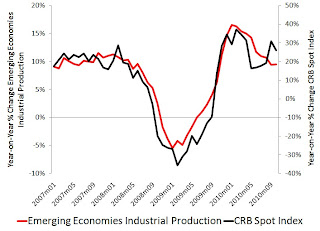 Sources: NBEPA , Moody's FreeLunch.com
I'd say Krugman has a solid case.  One could argue, though, that because the Fed's monetary policy gets exported to much of the emerging economy its monetary policy is providing stimulus to these countries and through them is indirectly putting upward pressure on commodity prices.  Even so, this still does not mean U.S. monetary policy has been too loose. It could be that the Fed's global monetary stimulus is simply putting the emerging economies back on their trend growth path.  After all, the emerging economies were growing in the double digits before the Great Recession and are only now returning to trend growth.  This can be seen in the figure below: (Click on figure to enlarge.) 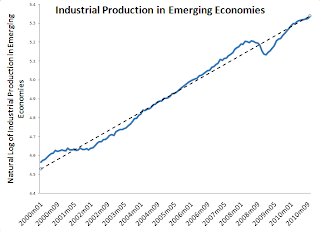 Update: Menzie Chinn looks at petroleum prices and comes to a similar conclusion.  Here is an interesting excerpt from his post:


One last observation regarding the monetary/real debate over the oil price resurgence. If indeed oil prices were rising over the past month primarily because of monetary policies in the US, one would expect the oil price change in the US to diverge from that in other economies not undertaking another round of quantitative expansion. Figure 4 shows the price of oil expressed in dollars, and in euros.

For the jump in prices during December, I don't see a pronounced divergence.