For some time now, I have been making the case that a sign of QE2 success would be rising yields rather than falling yields.  Yes, interest rates may initially fall, but if QE2 is successful in raising expectations of real growth then interest rates should start to increase.  For example, back in December, 2010 I said the following:

If QE2 is successful, then we would expect treasury yields to rise!  A successful QE will first raise inflation expectations.  This alone will put upward pressure on nominal yields.  However, expectations of higher inflation are in effect expectations of higher nominal spending.  And higher expected nominal spending in an economy with sticky prices and excess capacity will lead to increases in expected real economic growth.  The expected real economic growth should in turn increase real yields.  It is that simple.

Here is an updated graph from a more recent post that indicates this is in fact happening: 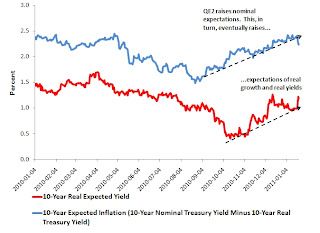 Given this understanding, it has been frustrating to watch the Fed sell QE2 to the public as working through the lowering of interest rates.  This marketing of QE2 creates the false impression it will only work if yields remain low.  It gives critics of QE2 more ammunition and ultimately undermines the effectiveness of the program. Thus, I was please to see Bernanke say this today in his speech:


A wide range of market indicators supports the view that the Federal Reserve's securities purchases have been effective at easing financial conditions... Yields on 5- to 10-year Treasury securities initially declined markedly as markets priced in prospective Fed purchases; these yields subsequently rose, however, as investors became more optimistic about economic growth and as traders scaled back their expectations of future securities purchases. All of these developments are what one would expect to see when monetary policy becomes more accommodative.

It is about time.
Posted by David Beckworth at 1:55 PM