The Metric You Should Be Watching But Aren't

I recently made the case that money demand remains elevated and continues to be a drag on the economy.  The  flow of funds data for 2010:Q4 supports this conclusion.  This data shows that the share of nonfinancial private sector assets in liquid form remains relatively high.  Households and firms continue to hold significantly more liquid assets than they did prior to the recession.  The good news is that it the share of liquid assets  dropped slightly in Q4. Presumably, the share of liquid assets continued to decline in early 2011 though recent global events may change that.
Using the Flow of Funds data, the figure below shows for the combined balance sheets of households, non-profits, corporations, and non-corporate businesses the percent of total asset that are highly liquid ones (i.e. cash, checking accounts, saving and time deposits, and money market funds) as of 2010:Q4.  The figure also shows M3 velocity. 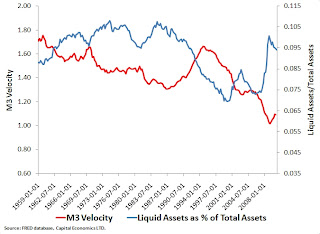 Other than the 1995-1999 period, there appears to be a strong negative relationship between these two series. The reason is obvious:  the greater the demand for liquid assets the greater the fall in spending and money velocity.  If we take the year-on-year growth rate of these two series, exclude the  1995:Q1-1999:Q4 period, and throw them into a scatterplot we see this indeed is a strong relationship*: 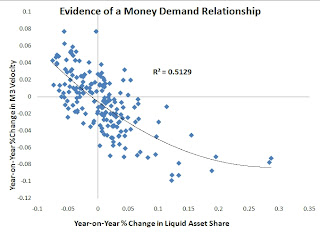 This liquid share seems to provide a good indicator of whether there remains an excess money demand problem that is preventing a robust recovery.  This, then, is the metric you should be watching but aren't.  Until it falls further we can expect nominal spending to remain sluggish.
*The full sample period has a R2 of 42%.
Posted by David Beckworth at 1:39 PM