The ECB Needs the Fed Now More Than Ever

And it is not because the ECB needs more currency swaps.  It is because the ECB needs the Fed for cover.  Here is why.  The Fed is a monetary superpower.  It manages the world's main reserve currency and many emerging markets are formally or informally pegged to dollar. As a result, its monetary policy gets exported to much of the emerging world. This means that the other two monetary powers, the ECB and Japan, have to be mindful of U.S. monetary policy lest their currencies becomes too expensive relative to the dollar and all the other currencies pegged to the dollar. So, to some extent U.S. monetary policy also gets exported to the Eurozone and Japan too.

This exporting of Fed policy to the Eurozone can be seen in the figures below.  The first figure shows the targeted policy interest rates for both the Fed and the ECB since the Euro's inception in 1999.  The figure shows that the ECB adjusted its target interest rate in a manner that seems to follow movements in the targeted federal funds rate, a response consistent with the Fed being a monetary superpower.  Even the ECB's attempt to break away and tighten in 2011 appears to be conforming to the irresistible pull of the Fed's power. 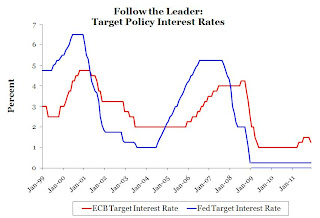 The next figure shows the year-on-year growth rate for NGDP across the two regions.  The arrows highlight what appear here too to be a leading relationship for the USA: nominal spending first takes off in the USA then in Europe and then slows down in that order too. 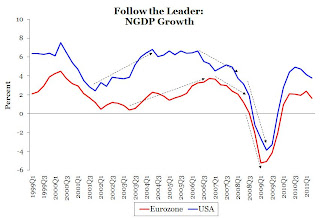 Again, an easy way to explain these relationships is that the Fed is a monetary superpower and influences monetary policy in both the United States and the Eurozone.  Thus, when the Fed was too easy in the early-to-mid 2000s it fueled rapid nominal spending growth in both regions.  Likewise, when the Fed became passively too tight in 2008 it stalled nominal spending growth in both places too.


The Fed, therefore, should be able to help spur nominal spending growth in the Eurozone by do something radical, like adopting a NGDP level target that would return U.S. NGDP to its pre-crisis trend.  This would imply aggressive monetary easing by the Fed that, in turn, would put downward pressure on the dollar.  This would create the incentive for the reluctant Germans--who seem to care as much about their exports as they do about inflation--and the ECB to get serious about opening their monetary spigots.  In other words, a sufficiently aggressive Fed would provide the cover for the ECB to do what it needs to have done all along.

Of course, a more efficient way to do this would be a coordinated effort, such as the plan suggested by Lars Christensen, where the major central banks of the world work together to raise their nominal spending to pre-crisis trend levels.  But since this type of coordination does not seem likely anytime soon, it seems natural for the reigning monetary superpower to take the lead and start a global nominal spending recovery.

*These impulse response functions come from a VAR with just the two NGDP growth rates and a constant.  Five lags are used along with a Cholesky decompostion.
Posted by David Beckworth at 4:37 PM