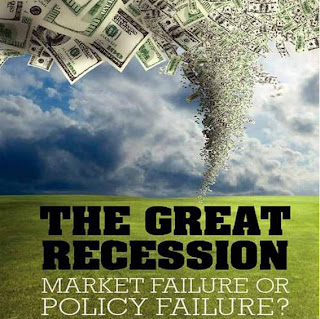 John Taylor has a new post praising Robert Hetzel's new book, "The Great Recession, Market Failure of Policy Failure?".  As you may recall, Market Monetarists (MM) claim Robert Hetzel as one of their own since he has been making the argument since early 2009 that tight Fed policy ultimately caused the Great Recession. What is remarkable about Hetzel making this standard MM argument is that he did so as a Fed insider.  Now it seems John Taylor is becoming sympathetic to the idea (my bold):

So with this interpretation, there is a clear connection between the too easy period and the too tight period, much like the connection between the “go” and the “stop” in “go-stop” monetary policy, which those who warn about too much discretion are concerned with. I have emphasized the “too low for too long” period in my writing because of its “enormous implications” (to use Hetzel’s description) for the crisis and the recession which followed. Now this does not mean that people are incorrect to say that the Fed should have cut interest rates sooner in 2008. It simply says that the Fed’s actions in 2003-2005 should be considered as a possible part of the problem along with the failure to move more quickly in 2008.

John Taylor appears to be really close to my view of monetary policy over the past decade:  it was too loose in the early-to-mid 2000s and was too tight beginning in 2008.  And like all Market Monetarists, he believes a big reason for these failures is that the Fed did not follow a systematic, rules-based approach to monetary policy.  We agree and would like it to be a nominal GDP level rule.  If Taylor can buy Evan P. Koenig's argument that the Taylor Rule is just a special case of  a nominal GDP level target then he is even closer to Market Monetarism than he realizes.