Are the Green Shoots for Real?

Joe Weisenthal has a number of post arguing that data are showing the green shoots of a robust recovery.  I hope he is right, but am leery of jumping the gun in believing a real recovery is underway.  There is still a shortage of safe assets and liquidity demand remains elevated. What would really convince me that a strong recovery were underway would be a marked improvement in two forward-looking indicators. The first one is a question on the Thompson Reuters/University of Michigan Survey of Consumer Sentiment where households are asked how much their nominal family income is expected to change over the next 12 months.  The figure below average response for this question up through February, 2012. 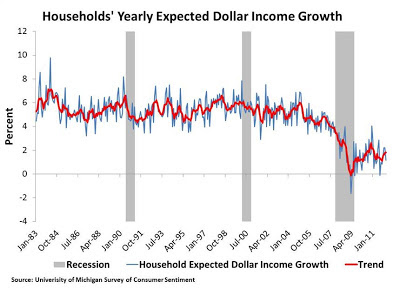 This figure shows that during the Great Moderation period (1983-2007) households expected their dollar incomes to grow about 5.3% a year. This relative stability of expected nominal income growth  is a testament to the success of monetary policy during this time. However, since 2008 households have expected 1.6% dollar income growth on average.  Until this changes, there is no way a recovery will take hold.  And yes, this speaks poorly of Fed policy since 2008. (My access to this data is limited by a 6-month lag.  So if you have access to this data, please let me know the latest numbers.)

The second indicator is simply the 10-year treasury yield.  As I noted many times before, this interest rate is currently at historic lows largely because of the weak economy, not the Fed (i.e. the short-run natural interest rate is depressed due to an increase in desired savings and/or a decrease in desired investment).  If the economic outlook were to improve, then the 10-year yield would go up because of higher expected real growth as well as some higher expected inflation.  And yes, the Fed could do more here by raising  expectations of future nominal income growth.  An explicit nominal GDP target should do the trick: 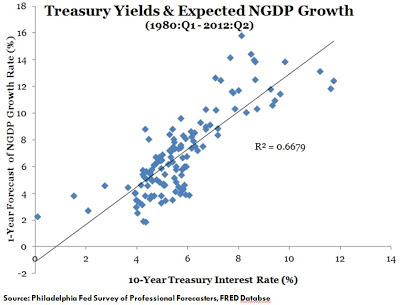 So until these two forward-looking indicators meaningfully turn around, I will remain hopeful but uncertain about our recovery.
Posted by David Beckworth at 1:35 PM