Going All Natural at the Fed

Has the market-clearing or 'natural' short-run  interest rate been negative over the past seven years? The answer to this question would go a long ways in ending much confusion about Fed policy. If the answer is yes, then the Fed has not been 'artificially' suppressing interesting rates as many have claimed. If the answer is no, then then Fed has been keeping monetary policy too loose. In other words, one cannot use interest rates to talk about the stance of monetary policy unless one compares them to their natural rate level. 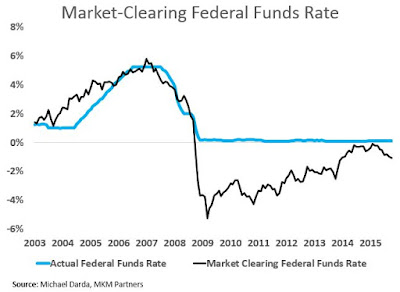 While these estimates are nice, it would be immensely helpful if the Federal Reserve published its own monthly estimate of the short-run natural interest rate. The Fed has a huge research staff, lots of resources, and is capable of providing this important information. It would be in the Fed's own best interest if it did so. Imagine if the Fed could point to a figure like the one above whenever someone accused it of artificially suppressing interest rates. It would make everyone's life much easier.

Well, today we learned from the October 2015 FOMC minutes that this information is being produced by the board of governors staff (my bold):

The staff presented several briefings regarding the concept  of an equilibrium real interest rate—sometimes labeled the “neutral” or “natural” real interest rate, or “r*”—that can serve as a benchmark to help gauge the stance of monetary policy. Various concepts of r* were discussed. According to one definition, short-run r* is the level of the real short-term interest rate that, if obtained currently, would result in the economy operating at full employment or, in some simple models of the economy, at full employment and price stability. The staff summarized the behavior of estimates of the shortrun equilibrium real rate over recent business cycles as well as longer-run trends in real interest rates and key factors that influence those trends. Estimates derived using a variety of empirical models of the U.S. economy and a range of econometric techniques indicated that short-run r* fell sharply with the onset of the 2008–09 financial crisis and recession, quite likely to negative levels. Short-run r* was estimated to have recovered only partially and to be close to zero currently, still well below levels that prevailed during recent economic expansions when the unemployment rate was close to estimates of its longer-run normal level.

The Fed staffers are producing estimates of the short-run natural interest rate so why not share it with the public? Why not add it to Fed's collection of statistics that publishes on its website?  It sounds like the Fed has a range of estimates so it could report point estimates along with confidence intervals surrounding it. So how about it Janet Yellen? Why not go all natural at the Fed?

Related
A Plea to My Fellow Free Marketers
The Fed Did Not Enable the Budget Deficits
Saver's Real Problem
Posted by David Beckworth at 6:22 AM