Here is an interesting take on the Fed's December mistake by Jed Graham:

Janet Yellen’s Federal Reserve has done something that no other Fed has done since Paul Volcker aimed to quash runaway inflation in the early 1980s, even if it meant a recession — and it did.

New Commerce Department data out Friday show that nominal GDP grew at a 1.5% annualized rate in the fourth quarter, casting further doubt on the Fed’s decision to begin hiking its key interest rate in December. (Inflation-adjusted GDP rose just 0.7% in Q4.)With the exception of Volcker’s interest-rate hike in early 1982 amid a recession, no other Fed has raised rates during a quarter in which nominal GDP grew less than 3%, dating back to the early 1970s.

Remember, nominal GDP is simply total dollar spending--the money supply times how often it is used--on final goods sold. It is therefore a broad gauge of monetary conditions. Jed's point, then, is that the Fed chose to raise interest rates even though monetary conditions were weakening. Here is the figure from Jed's article documenting this 'historic misfire': 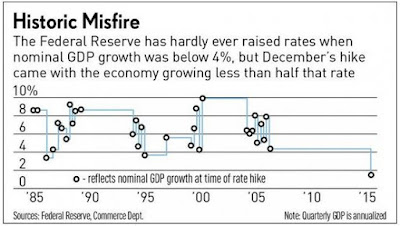 I like what Jed is doing here, but as noted in my previous post I think the Fed's mistakes began long before December. Nonetheless, there does seem to be a growing consensus that the Fed's tightening got ahead of the recovery as noted by Martin Sanbu. And this is not just a pundit thing. The fed fund futures market now seems to be signalling the same message.

P.S. I was interviewed on Bloomberg TV yesterday about the Fed's policy mistake.

Posted by David Beckworth at 5:49 PM