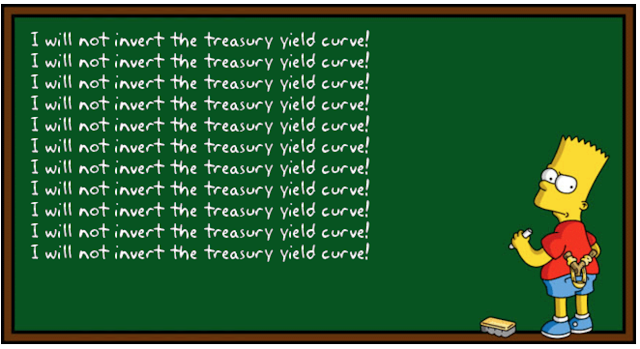 The Fed needs to start worrying more about the flattening treasury yield curve.  Bloomberg is reporting that bond traders are getting ready for a yield curve inversion as soon as next week.  One fixed income manager quoted in the article had this to say:


If the Fed decides to move more this year, I think it’s inevitable that the curve inverts and I think it will be a mistake,” said Colin Robertson, managing director of fixed income at Northern Trust Asset Management... He sees greater than a 50 percent chance of the 2- to 10-year spread inverting if the Fed raises rates once more this year, and if the central bank follows its projections and hikes twice more, Robertson sees inversion as a lock.

Here is what the 10-year minus 2-year spread currently looks like: 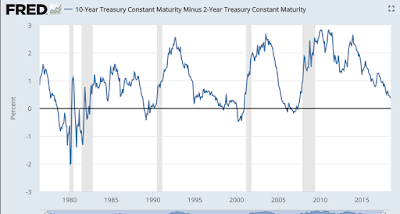 The yield curve spread is definitely heading down, but is it truly on the cusp of an inversion? It is hard to know for sure, but there are two big clues suggesting the answer is yes. First, as noted by Robert Burgess, yield curve inversions are already happening overseas:

For much of the past year or so, investors and economists have anxiously watched the relentless shrinkage of the gap between short- and long-term U.S. bond yields to the narrowest levels since 2007. After all, an inversion —  when long-term yields fall below short term ones — preceded each of the last seven recessions. But while everyone has been so focused on the U.S, they seemed to have missed the global yield-curve inversion.

Within the past two months, the yield on an ICE Bank of America index of government bonds due in seven to 10 years has fallen below the yield on an index of bonds due in one to three years for the first time since the first half of 2007. The strategists at JPMorgan Chase & Co. said they were seeing the same thing in indexes they manage. Although the U.S. economy is in solid shape, there have been signs of weakness in the euro zone, China and emerging markets over the past month.

Given the global integration of capital markets, it is not hard to imagine the overseas inversions working their way into the U.S. treasury yield curve. Some Fed officials are paying close attention to this possibility like Atlanta Fed President Raphael Bostic:

“I have had extended conversations with my colleagues about a flattening yield curve” and the risks of it inverting, he said at a moderated forum in Augusta, Georgia on Wednesday. “We are aware of it. So it is my job to make sure that doesn’t happen... Hopefully we won’t get to that inversion.”

That is good to know. Unfortunately, others on the FOMC are more sanguine about the flattening yield curve. From the May FOMC meeting minutes we learn the following:


[P]articipants also discussed the recent flatter profile of the term structure of interest rates. Participants pointed to a number of factors contributing to the flattening of the yield curve, including the expected gradual rise of the federal funds rate (and) the downward pressure on term premiums... A few participants noted that such factors could make the slope of the yield curve a less reliable signal of future economic activity.

So not everyone at the FOMC is equally concerned about an inversion. This complacency may be one reason why the FOMC, as a whole, is predicting an inverted yield curve of its own making.

The FOMC currently plans to have its short-term interest rate target range at 3.00% - 3.25% by the end of the 2019. Meanwhile the 10-year treasury yield has been bouncing between 2.80% and 3.00%, close to FOMC's long-run federal funds rate estimate of 2.90%. The FOMC, in other words, sees itself raising its short-term interest rate target such that the yield curve spread will become negative or inverted over the course of the next year and a half. This prediction is our second big clue that the yield curve is likely to invert.

Former Fed chair Ben Bernanke similarly thought it would be different back in 2006. He said not to worry about the flatting yield curve at that time. Bernanke pointed to the term premium as the culprit even as the Fed was raising its interest rate target. But the standard yield curve recession predictions were borne out and we got the Great Recession. This recent experience should give today's FOMC pause.

Moreover, as Michael Bauer and Thomas Mertens recently show, a negative yield-curve spread still does an amazing job predicting recessions. Consequently, the FOMC should not be aiming to raise short-term interest rates above long-term interest rates. The last thing the Fed should want to do is sing the treasury yield curve blues.  Better to play it safe than to risk choking off the expansion.

Update: I got into a twitter conversation regarding this post and my critique of Ben Bernanke's speech in 2006. As a result, I constructed the following figure using the New York Fed's estimates of term premiums. It shows the 10 year minus 1 year treasury spread decomposed into (1) an expected rate path spread and (2) a term premium spread. These two component add up to the overall spread.

The figure reveals that while Bernanke was right about a declining term premium in 2006 it was also the case that the expected path of short-term rates was declining. It was signaling recession. What this implies for today is that the FOMC should tread cautiously in interpreting the flattening of the yield curve. There may be more to the story than term premiums. 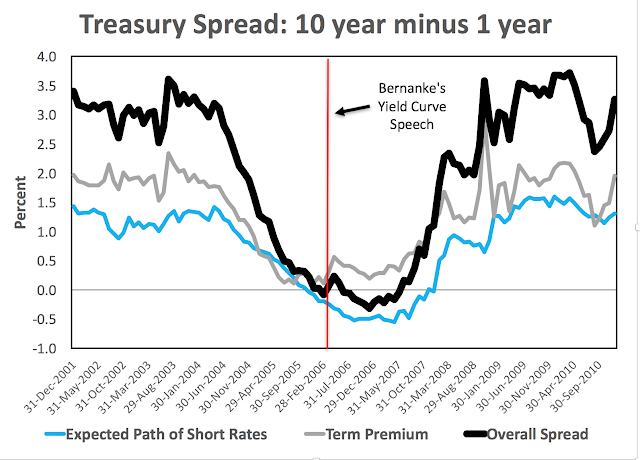 Posted by David Beckworth at 9:56 PM