Are the days of the Fed's floor system numbered? Last month I claimed that they could be if President Trump's fiscal policy continues to spawn rapid increases in the issuance of treasury bills. His administration is relying heavily on treasury bills to finance its deficits as seen below: 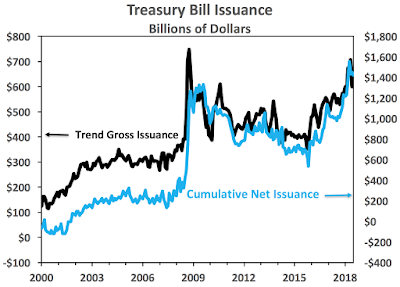 This increased issuance of treasury bills matters because it implies, all else equal, a rise in treasury bill yields. Below is a figure showing the  DTCC overnight treasury-repo rate relative to the IOER rate. Lately, the treasury-repo rate has been bouncing above the interest on excess reserves (IOER) rate. This development could be a big deal. 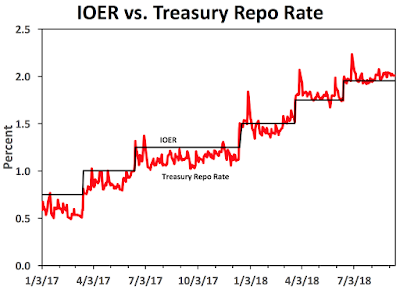 If sustained, this rise of overnight interest rates above the IOER rate could spell the end of the Fed's floor system.


To see why, recall that the Fed moved to a floor operating system in late 2008 by paying interest on excess reserves (IOER) at a rate higher than comparable short-term market interest rates. This pushed banks onto the perfectly elastic region of their reserve demand curve and allowed the Fed to add reserves to the banking system without causing its target interest rate to change. The supply of reserves were thus "divorced" from the setting of monetary policy (Keister et al. 2008). This divorce was seen by many a virtue of the floor system, for it allowed the Fed to manage bank liquidity and monetary policy independently, changing the size of its balance sheet to control liquidity, and the IOER rate to alter its monetary policy stance.

Maintaining this floor system, therefore, requires keeping the IOER rate at or above comparable market interest rates, so that banks will be willing to hold on to any reserves that come their way. The recent uptick in treasury bill issuance seems to be undermining this requirement and raises the possibility that the Fed could be inadvertently forced off of the floor system by fiscal policy.


Further evidence that something may already be afoot with the rise in the overnight repo rates can be seen on the aggregate bank balance sheets from the Fed's H8 database. The figure below shows the asset category "total fed funds sold and reverse repos" as the black line. The blue line shows the same category, but just for banks transacting with other banks. This figure indicates there still is not much interbank lending, but there does appear to be a surge in nonbank lending in repos. This makes sense given the recent surge in repo rates. It may also be the first crack in the armor of the Fed's floor system as it suggest banks are beginning to invest reserves in the repo market rather than at the Fed. 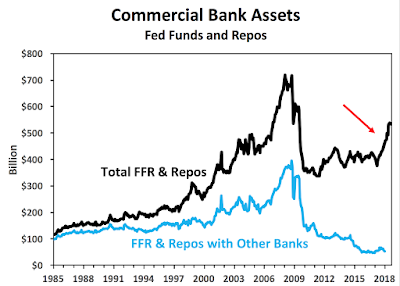 Something else I showed in my piece last month was the tight fit between treasury bill issuance (normalized by the total amount of marketable treasury securities) and the IOER-Libor spread. One interpretation of this relationship is that the movement of treasury repo rates gets transmitted into interbank rates via arbitrage. 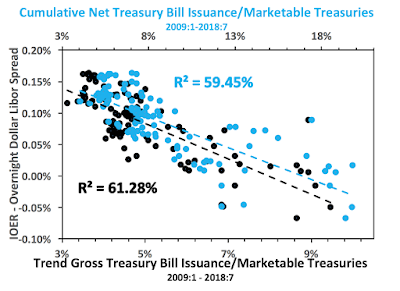 This IOER-Libor spread, in turn, is closely tied to the percent of bank assets held in the "cash" category in the H8. (Since late 2008, this category has consisted mostly of bank reserves.) The specific pattern has been that as the IOER spread rises (falls) the cash share also rises (falls) as seen below: 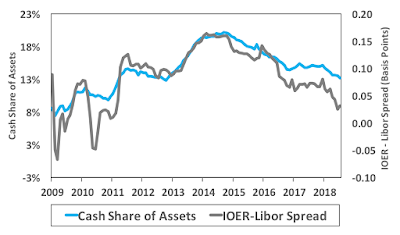 Conversely, when the that as the IOER spread rises (falls) the loan share of bank assets falls (rises) as seen below: 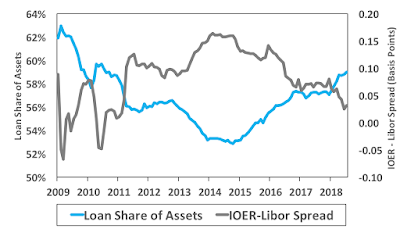 Based on the three above charts, if the treasury-repo yield continues to be above the IOER, we should expect to see a growing share of bank assets invested in loans and fewer in excess reserves.1 That would bring the end of the Fed's floor system and rise in the inflation rate.

Some worry the liquidity coverage ratio (LCR) may complicate this story. As of 2015, the LCR started requiring banks to hold enough high-quality liquid assets to withstand 30 days of cash outflow. The LCR, consequently, has increased demand for such assets of which bank reserves and treasury securities are considered the top tier. When the IOER rate > treasury repo rates, the LCR created additional demand for reservers relative to treasuries. If, however, IOER rate <  treasury repo rates the additional reserve demand will disappear and further hasten the demise of the floor system.

The question, then, is will the treasury bill yields continue to stay above the IOER rate? It certainly seems possible with President Trumps budget deficits. Only time will tell.

P.S. I have a working paper on the Fed's floor system. I am beginning to wonder if it will be outdated before it gets published.

P.P.S. I see that George Selgin makes the same point near the end of this post.

1To be clear, banks cannot control total reserves, but they can control the form of the reserves. That is, banks can choose to hold excess reserves or invest in other assets like treasuries and loans that, in the aggregate, would lead to a rise in required reserves and a fall in excess reserves.

Update: One implicit assumption in my analysis is that banks are price takers, not price makers, in the overnight market. If one takes the H8 data series "fed funds sold and reverse repos" and divides it by the repo market as calculated by this New York Fed study (and updated to a more current expansion factor based on an exchange with one of the authors), one gets an average of 10 percent for the 2008:Q4-2018:Q2. Banks have been a small part of the overnight market during the Fed's floor system.

Update II: After more reflection, I am having doubts about my assumption of banks being price takers in the overnight market. I think my calculations of bank share of the repo market supports this contention, but it is hard to reconcile with the reality that overnight market rates followed movements in the IOER rate. On the other hand, if banks are able to move overnight markets then why did they fail to completely eliminate the IOER spread over comparable short-term interest for most of the past decade?
Posted by David Beckworth at 12:32 PM