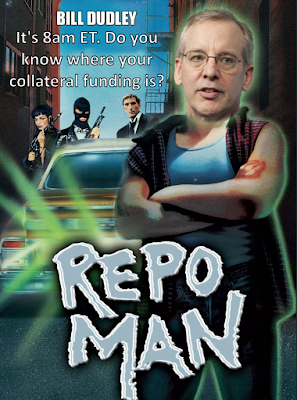 
The repo market hit some road bumps last week. Trading pressures in this key funding market pushed repo interest rates well above the Fed's target interest rate range. This development caused some observers to worry that it was a 2008-type run on the repo market all over again. Bill Dudley and others, however, noted this was a technical blip, not the beginning of a financial crisis. Moreover it was something the Fed could easily fix with an old fashion tool, temporary open market operations, even if the Fed got off to a slow start doing so last week.

There have been great Twitter discussions and explanations of this repo market stress, including ones from Nathan Tankus, Bauhinia Capital, Guy LeBas, and George Selgin. There are also have been many good pieces from journalists and think tanks. Here, I want to echo a few of their points and speak to where I hope this experience takes the Fed's operating system in the long run.  Let's begin with what happened.

Stumbling Back into a Corridor System
The standard explanation for what happened has two parts. First, the Fed's quantitative tightening (QT) put the U.S. banking system close to the point of reserve scarcity given the new post-crisis regulations. Second, the Treasury recently auctioned off new securities and at the same time collected corporate tax receipts. These two developments further reduced bank reserves and pushed the banking system back into a reserve-scarce environment. Put differently, the Fed unintentionally stumbled from its floor operating system of the past decade back into a corridor operating system, the framework it intentionally left in late 2008.

This story can be illustrated using a simple supply and demand model of bank reserves. Using this framework, the figure below on the left shows what the Fed's operating system looked like before the fall of 2008.  This was a simpler time when the Fed kept minimal reserves and banks traded for them on the interbank market. The Fed would conduct open market operations (OMOs) to adjust the supply of bank reserves so that a particular interest rate target was hit. Graphically, this meant moving the red line (reserve supply) along the downward slopping part of the blue line (reserve demand). Changes in the supply of reserves directly influenced the interest rate target. Monetary policy and money were directly linked.

This changed in late 2008 when the Fed expanded the supply of reserve such that the reserves were now on the flat (perfectly elastic) portion of the demand curve. The Fed's floor operating system had emerged. This can be seen below in the figure on the right.  Here, the quantity of reserves could change with no effect on the interest rate target. Monetary policy was now divorced from money. The Fed, in other words, could adjust its balance sheet independent of the stance of monetary policy. This was the appeal of the floor system. 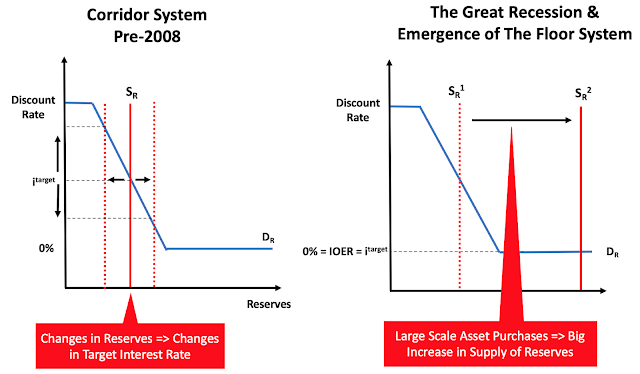 The Fed's floor system got further refined after the crisis with changes in reserve demand brought about by Dodd-Frank and Basel III. New regulations likes the leverage coverage ratio (LCR), supplemental liquidity ratio (SLR), and resolution planning for global systematically important banks (G-SIBs) increased demand for reserves. This can be seen below with the shifting out of the reserve demand curve (blue line) in the figure on the left.

Finally, the Fed reduced bank reserves via the shrinking of its balance sheet or QT from 2017 to 2019. The goal was to keep the banking system on the flat part of the reserve demand curve, but with the lowest level of reserves possible. No one knew for sure where that would be, but if it were passed it would be made evident by overnight interest rates rising up. That is exactly what happened this past week with the Treasury sales and collection of corporate tax receipts and can be seen below in the figure to the right. The Fed's temporary OMO's is an attempt by the Fed to offset these recent Treasury actions and push the banking system back onto the flat portion of the demand curve. 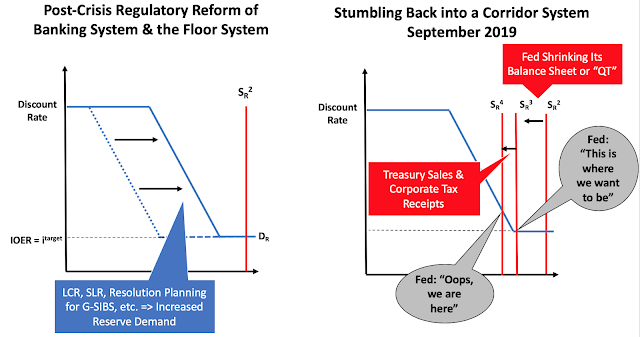 What is the Fed Doing Now?
The Fed is now engaging in temporary open market operations (OMOs) via overnight and term repos to bring the repo rate in line with its interest rate target. Some are calling this a bailout of the banking system, but these responses are what normally happens in a corridor system. It is what the Bank of Canada currently does with its corridor system and it is what the Fed did from the 1920s up until 2008. This is not a bailout, but a temporary provision of liquidity to the banking system.

The figure below shows that $75 billion of overnight repos this past week are relatively small as a percent of the Fed's total assets. At 1.95% of total assets, they are small compared to the temporary OMOs in the decades leading up to the crisis. If we add in the additional $90 billion in term repo to be disbursed this week, it still is about where the temporary OMOs typically were as a percent of total assets prior to 2008.

The most striking part of the figure, if anything, is the absence of temporary OMOs over the past decade under the floor system. This absence of repo activity by the Fed apparently has led many observers to forget the Fed engaged in this type of activity for most of its history. Maybe it also led to some repo atrophy at the New York Fed as discussed below. 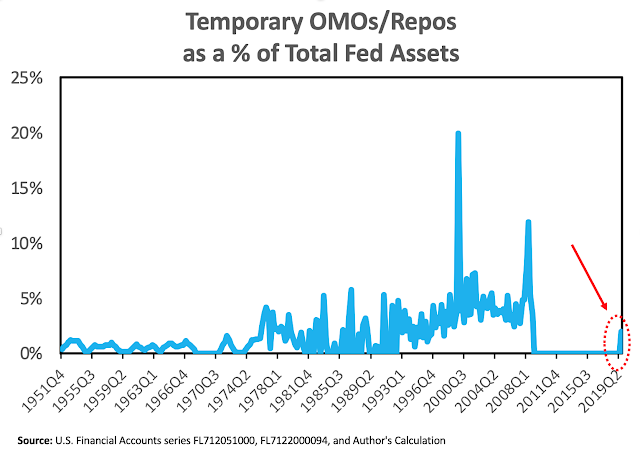 Why Did the Fed Stumble?
So, why did the Fed not see this Treasury-related reduction in bank reserves coming? It should not have been a surprise and the fact that it was has some questioning the competence of the New York Fed. Some are even wondering if the absence of Simon Potter, the former head of the New York Fed's Market Group, was a reason for the misstep.

This criticism seems off to me. Yes, Simon Potter's presence would have been nice this past week, but the Market Group is more than one person. There are other talented people in this group who are also well informed. I also find it a reach to blame the market inexperience of New York Fed President John Williams. This too puts too much weight on one person and ignores the collective wisdom of the New York Fed staff.

I think a simpler explanation is that a floor system is just hard to run in the United States. First, no one knew for sure when the reserve scarcity point would hit because no one knew exactly how the regulations would manifest themselves in each bank. Even if they did know this regulatory part, they still would not know for certain if they had hit reserve scarcity until overnight rates shot up.

Second, the New York Fed's slow response to the repo market stress might itself also be the fault of the floor system. The floor system has meant no need for temporary OMOs for almost a decade. Maybe the New York Fed was simply out of practice--no repo muscle memory--and caught off guard.

Longterm Solution for the Fed
This repo market bump in the road should encourage the Fed to rethink the longterm future of its operating system. The floor system was supposed to bring greater interest rate control to the Fed, but this experience suggest that this is not the case. Moreover, as I noted in a previous post, the Bank of Canada appears to have better interest rate control with its symmetric corridor system. This, in my view, should be the longrun destination for the Fed's operating system.

As George Selgin notes, the Fed's adoption of a standing repo facility could be a step in that direction.  There will also need to be tweaks to the regulatory front as well. The sooner we start this journey the better.

Some commentators worry these funding problems will continue to plague the Fed's floor system in the future given the Fed's desire to keep its balance sheet as small as possible while still being on the flat portion of the reserve demand curve. Since it is hard to know exactly where that sweet spot is on the curve, I agree that we may see strains again in the repo market. Eventually, this discomfort should move us toward adopting the standing repo facility, but until that time get used to seeing more temporary OMOs and Bill Dudley explainers. The Fed's repo man will come again.

P.S. There was some discussion as to who was holding the remaining reserves. This chart partly answers that question. 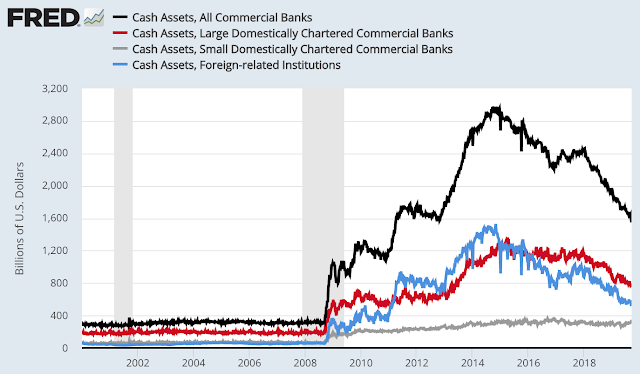 Source: FRED Data
Posted by David Beckworth at 5:29 AM