The Employment Numbers in Perspective

Friday we learned the employment conditions continue to deteriorate:

The nation lost 524,000 jobs in December, bringing the total drop for last year to 2.589 million, just shy of the 2.75 million decline at the end of World War II, the Labor Department reported yesterday in Washington. The unemployment rate climbed to 7.2 percent, the highest level in almost 16 years.

Although these numbers are bad, the widely-reported comparison to WWII is misleading. It fails to account for the fact that the U.S. labor force is now about 2.5 times larger than at the end of WWII. Consequently, a more appropriate comparison would look at the number of lost jobs relative to the labor force for these two periods, not the absolute number. Alternatively, one could simply look at the percent change in employment. As noted by The Economist magazine, this approach shows a 1.9% employment loss in 2008 versus a 2.7% 12-month loss at the dept of the 1974-75 and 1981-82 recessions. This fact is highlighted below in the figure of the year-on-year percent change in NFP employment since the late 1940s. Recessions are highlighted by the gray columns. (Click on figure to enlarge.) 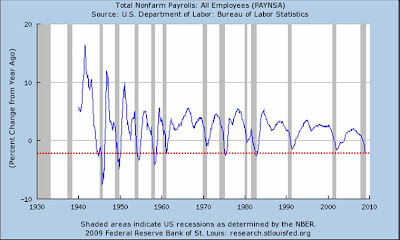 To be clear, I am not saying the almost 2.6 million lost jobs are inconsequential. What I am saying is that these numbers do not yet indicate that this recession in terms of employment is the worst since the end of WWII.

Update: ECB once again provides a good response in the comments section:

[I]f we look at the fall-off in the employment/pop ratio since 2000, that is dramatic is it not? And one measure of hardship that mainstream economists ignore, is the number of people suffering from what USDA calls food insecurity. This number now stands at 12 million. That is a 40% increase from 2000. I think you may be a little blase in downplaying the recent employment fall.