The Saving Glut theory of the buildup of global economic imbalances and its application to the current economic crisis has been a popular story ever since it was introduced by Ben Bernanke. Menzie Chinn, however, has dealt a serious critique to this view that probably will be followed by others as time goes on. His view is that the Saving Glut (1) should be put to rest as an idea, (2) is mostly a mirage of the data, and (3) did not cause the current economic crisis. I agree with most of what Chinn says in this critique. I would note, however, that some of the key problems with the Saving Glut theory occur because the role of U.S. monetary policy is not properly accounted for in the analysis. Here are the problems:

(1) The Saving Glut theory has an underlying theme of inevitability. The implicit message is that the U.S. was destined to be a profligate spender because of the huge CA surpluses in Asian and oil-exporting countries. Really? Were U.S. policymakers truly constrained by the whims of foreign savers?

A key reason why this inevitability view is suspect is that it ignores a key fact: the Fed is a global monetary hegemon. It holds the world's main reserve currency and many emerging markets are formally or informally pegged to dollar. Thus, its monetary policy is exported across the globe. This means that the other two monetary powers, the ECB and Japan, are mindful of U.S. monetary policy lest their currencies becomes too expensive relative to the dollar and all the other currencies pegged to the dollar. As as result, the Fed's monetary policy gets exported to some degree to Japan and the Euro area as well. From this perspective it is easy to understand how the Fed could have created a global liquidity glut in the early-to-mid 2000s since its policy rate was negative in real terms and below the growth rate of productivity (i.e. the fed funds rate was below the natural rate).

Given the Fed's role as a monetary hegemon the inevitability theme underlying the saving glut view begins to look absurd. Moreover, the Fed's superpower status raises an interesting question: what would have happened to global liquidity had the Fed run a tighter monetary policy in the early-to-mid 2000s? There would have been less need for the dollar bloc countries to buy up dollars and, in turn, fewer dollar-denominated assets. As a result, less savings would have flowed from the dollar block countries to the United States. In short, some of the saving glut would have disappeared.

What is interesting is that many advocates of the saving glut view who argued the U.S. had to run a current account deficit in the early-to-mid 2000s to accommodate the current account surpluses elsewhere in the world later argued in the middle of 2008 that loose U.S. monetary policy was being exported abroad creating too much stimulus in the dollar bloc countries. In other words, these observers had somehow gone from a world where the Fed is a slave to the dollar block countries to a world where the dollar block countries are a slave to the Fed. For example, here is Martin Wolf who argued early on the inevitability of U.S. current account deficits but then had this to say in June 2008:

To simplify, Ben Bernanke is running the monetary policy of the People’s Bank of China. But the policy appropriate to the US is wildly inappropriate for China and indeed almost all the other countries tied together in the informal dollar zone or, as some economists call it, “Bretton Woods II”.

Thus, not only have the imbalances proved hugely destabilising in the past, but they are going to prove even more destabilising now that the US bubble has burst. When most emerging economies need much tighter monetary policy, they are forced to loosen still further.

To be fair, Martin Wolf has since come to acknowledge the U.S. monetary policy played a role. But the point is clear: if the Fed was a monetary hegemon in 2008 then it was also one in the early-to-mid 2000s. It could have tightened policy then and prevented some of the saving glut.

(2) Long-term interest rates were going down across the globe. The saving glut, however, was regionally based in Asian and oil-exporting countries and mostly went to a regionally-based saving deficit area, the United States. How, then, could a regional saving glut cause global long-term rates to decline? (This is why the saving glut explanation for the interest rate conundrum in 2005 is far from satisfactory.) An easier explanation is that Fed's low interest rates in the early-to-mid 2000s were exported across the global economy as described in (1) and transmitted to long-term rates via the expectation hypothesis of the term structure of interest rates.

(3) If the huge CA surpluses in Asian and oil-exporting countries did, in fact, lead to the lowering of long-term rates in the U.S., which in turn fueled the housing boom, why did long-term rates start rising in 2006? How is that the saving glut could fuel low rates in the early-to-mid 2000s but not thereafter? See the figure below (click on figure to enlarge): 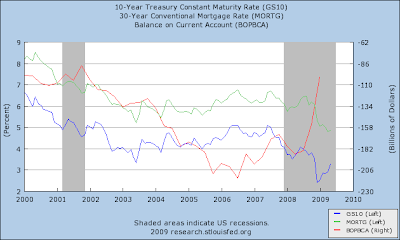 (4) Finally, close to 40% of mortgages issued at the height of the housing boom were either subprime or Alt-A. Unlike traditional long-term, fixed-rate mortgages these other type of mortgages had financing charges tied to short-term interest rates . The Fed controls short-term interest rates. The saving glut story typically focuses on the long-term rates. As Larry White notes, the Fed's policies clearly were the big factor here.

To be clear, I do believe this crisis was more than just poor choices made by U.S. policymakers. The securitization of finance, underestimating aggregate risk, the lowering of lending standards, rating agencies failing, aggressive lending tactics, and poor choices made by lenders all contributed to the current economic crisis. However, the Fed's monetary policy choices in the early-to-mid 2000s was in my view key to making these other developments more distortionary and its role helps shed light on the problems with Saving Glut view.
Posted by David Beckworth at 12:30 PM