The Amazing Resilience of the Fed's Inflation-Fighting Credibility

I was looking at the Philadelphia Federal Reserve Bank's Survey of Professional Forecasters and found the CPI inflation forecasts tell some interesting stories. Below is a plot of the 1-year forecast and the 10-year average inflation forecast (click on figure to enlarge): 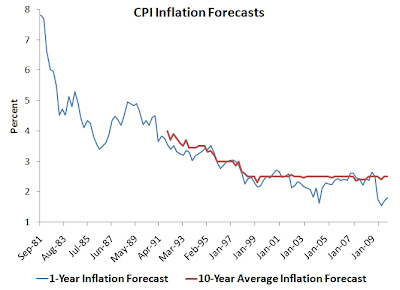 Unfortunately, the 10-year forecast data only goes back to 1991, but based on the similarities in the two forecasted series we can infer the 10-year forecast was probably elevated in the early 1980s as well. Not a terribly surprising result given the upward-trending inflation experience of the 1960s and 1970s.

What is even more amazing to me is that the Fed's inflation-fighting credibility has not been harmed by recent developments. The forecasters continue to predict a stable long-term trend inflation rate of 2.5%, roughly the same value that it has been since 1998. Given all the talk about the Fed blowing up its balance sheet and the potential of monetizing the debt this result is nothing less than amazing. It should also give pause to those inflation hawks who only see trouble on the horizon.
Posted by David Beckworth at 11:21 AM