Mark Thoma directs us to a new paper by Maurice Obstfeld and Kenneth Rogoff titled Global Imbalances and the Financial Crisis: Products of Common Causes. In this paper the authors acknowledge that highly accommodative U.S. monetary policy in the early-to-mid 2000s in conjunction with other developments played an important role in the build up of global economic imbalances. In their discussion of U.S monetary policy, interest rates, and global liquidity conditions they miss, however, some important points on the issues of (1) productivity growth and (2) the monetary superpower status of the Federal Reserve. Let me take each point in turn.

[T]he data do not support a claim that the proximate cause of the fall in global real interest rates starting in 2000 was a contemporaneous increase in desired global saving (an outward shift of the world saving schedule)... according to IMF data, global saving (like global investment, of course), fell between 2000 and 2002 by about 1.8 percent of world GDP... [A]n end to the sharp productivity boom of the 1990s, rather than the global saving glut of the 2000s, is a much more likely explanation of the general level of low [long-term] real interest rates.

So their story is that the productivity surge of the 1990s ended and pulled down long-term interest rates. This is a plausible story since productivity growth is a key determinant of interest rates, but the data does not fit the story. Below is a figure showing the year-on-year growth rate of quarterly total factor productivity (TFP) for the United States. The data comes John Fernald of the San Francisco Fed (Click on figure to enlarge): 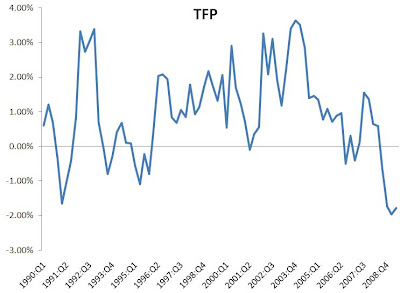 This figure shows the TFP growth rate did slow town temporarily in 2001 but resumed and even picked up its torrent pace for several years. Rather than pushing interest rates down this indicates they should have gone up. That still leaves the question of why long-term interest rates declined during this time. My tentative answer is that it was some combination of (1) a drop in the term premium that itself was the result of a false sense of security created by the Great Moderation and (2) and expectations of future short-term interest rates being low because of accommodative monetary policy.

The productivity point, however, does not end there. It becomes important in understanding why the Fed continued to keep interest rates so low for so long. As the authors note in the paper:

In early 2003 concern over economic uncertainties related to the Iraq war played a dominant role in the FOMC’s thinking, whereas in August, the FOMC stated for the first time that “the risk of inflation becoming undesirably low is likely to be the predominant concern for the foreseeable future. In these circumstances, the Committee believes that policy accommodation can be maintained for a considerable period.” Deflation was viewed as a real threat, especially in view of Japan’s concurrent struggle with actual deflation, and the Fed intended to fight it by promising to maintain interest rates at low levels over a long period. The Fed did not increase its target rate until nearly a year later.

In other words, the fear of deflation is what motivated Fed officials to keep interest rate low for so long. As I have noted many times before, though, the Fed's fear of deflation at this time was misplaced. Deflationary pressures emerged not because the economy was weak, but because TFP growth was surging as shown above. The Fed saw deflationary pressures and thought weak aggregate demand when in it fact it meant surging aggregate supply. Making this distinction is important if monetary policy wishes to fulfill its mandate of maintaining full employment. Not making this distinction in 2003-2004 meant an economy already buffeted by positive aggregate supply shocks (i.e. productivity surge) got simultaneously juiced-up with positive aggregate demand shocks (i.e. historically low interest rate policy). This was a sure recipe for economic imbalances to emerge somewhere.

The second point with the Obsteld and Rogoff's paper is that it fails to appreciate how important is the Fed's monetary superpower status. As I have explained before

the Fed is a global monetary hegemon. It holds the world's main reserve currency and many emerging markets are formally or informally pegged to dollar. Thus, its monetary policy is exported across the globe. This means that the other two monetary powers, the ECB and Japan, are mindful of U.S. monetary policy lest their currencies becomes too expensive relative to the dollar and all the other currencies pegged to the dollar. As as result, the Fed's monetary policy gets exported to some degree to Japan and the Euro area as well. From this perspective it is easy to understand how the Fed could have created a global liquidity glut in the early-to-mid 2000s since its policy rate was negative in real terms and below the growth rate of productivity (i.e. the fed funds rate was below the natural rate).

Obstfeld and Rogoff actually hint at this possibility briefly when they say the following:

the dollar’s vehicle-currency role in the world economy makes it plausible that U.S. monetary ease had an effect on global credit conditions more than proportionate to the U.S. economy’s size.

But then they go on to say

While we do not disagree entirely with Taylor [who believes the Fed was too accommodative in the early 2000s], we argue below that it was the interaction among the Fed’s monetary stance, global real interest rates, credit market distortions, and financial innovation that created the toxic mix of conditions making the U.S. the epicenter of the global financial crisis.