Are You Smarter Than A Professional Forecaster?

I have been making a lot of noise here about the Fed's passive tightening of monetary policy.  In particular, I have been pointing to declines in both inflation expectations and forecasts of nominal GDP (NGDP) to show that the Fed is allowing expectations of future aggregate demand (AD)  to fall.  Since future spending affects current spending, current Fed policy is also effectively slowing down current AD.  Given this running discussion of mine, I thought it would be interesting to see what my undergraduate students think about it.  Specifically, what is their outlook for AD?  On the first day of class I assign a personal profile sheet they have to fill out--helps me get to know them better--and this semester I added a question that asks them to forecast of the annualized NGDP growth for 2010:Q3 and 2010:Q4. I gave them a chart of the annualized NGDP figures of the previous 6 quarters and and told them to use it and their knowledge of what is happening to make their forecasts.
Since these are undergrad students mostly from Texas, a state that hasn't been hit as hard by the recession, and since many undergrads are not as engaged with the current events as they should be I expected rather optimistic forecasts.  Here is what I got from my three classes (click on figure to enlarge): 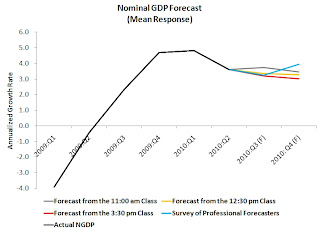 Much to my surprise my students overall see an ongoing downward trend in the growth rate of nominal spending.  All of their 2010:Q4 forecasts are lower than that coming from the Survey of Professional Forecasters.  I really expected more optimistic numbers.  Maybe they simply followed the trend from the previous quarters in making their forecasts or maybe they truly are worried about the future.  I look forward to class today to hear their justification for their forecasts.  I also look forward to seeing how their forecasts pan out compared to the professionals during the semester.
Posted by David Beckworth at 10:35 AM