For some time I have been making the case that the sustained decline in inflation expectations is indicating the market is expecting aggregate demand to decline going forward.  Given the Fed's failure to meaningfully respond to these forecasted declines, I have also claimed these developments effectively amount to a tightening of monetary policy.  This interpretation, however, can be challenged because inflation is a symptom of changes in aggregate supply and aggregate demand.  Thus, inflation expectations could be going down because productivity growth has been robust rather than from a decline in total current dollar spending. My view that it has been an expected weakening of aggregate demand driving the  declines in inflation forecasts has been based more on circumstantial evidence than any direct measures of aggregate supply or aggregate demand.  Recent data releases, however, now firmly support my view. First, nonfarm business labor productivity declined at annualized rate of 0.9% in the 2010:Q2.  No positive aggregate supply shocks here. Second, the just released Survey of Professional Forecasters shows a marked drop in the forecasted growth rate of aggregate demand over the next year as measured by nominal GDP (NGDP).  This drop is graphed below and shows the NGDP forecast made in May, 2010 and the NGDP forecast made in August, 2010. (Click on the figure to enlarge.) 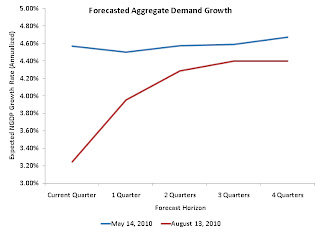 Here, the forecast for 2010:Q3 takes an alarming drop, going from a forecast of about 4.50% growth in May to a forecast of 3.24% in August.  The Fed, therefore, has allowed NGDP forecasts to fall by 1.26% over these two quarters.  Does that make any sense in the current economic environment?   Does the Fed not realize that by passively allowing such developments it is effectively tightening monetary policy?  I wish I could have a one-on-one with some of the Fed officials and ask them to explain to me their indifference to these developments.
So it is happening: aggregate demand forecasts are falling.  And unless the Fed arrests this development it could get worse. Hopefully the FOMC's decision last week to stabilize the Fed's balance sheet is an indication that it is begining to take notice of these warning signs.
PS.  This crisis has really driven home to me the need for a NGDP futures market.  Why does no such  market exist?
PPS. The above discussion highlights the importance of being careful in interpreting inflation.  In general, I don't think we should spend so much time looking at inflation but rather focus on the underlying causes of inflation: shocks to aggregate demand and aggregate supply.  Monetary policy can only stabilize the former and should avoid responding to the latter.  A pure inflation target, however, ignores this distinction and has the potential to increase macroeconomic instability as shown here.  That is why I favor a NGDP target over an inflation target.
PPPS.  The FOMC statement from last week said the following:

Measures of underlying inflation have trended lower in recent quarters and with... longer-term inflation expectations stable, inflation is likely to be subdued for some time.

How can the FOMC claim inflation expectations are stable? Bernanke made the same puzzling claim in his last speech which prompted me to do my last post. What inflation forecast is the FOMC using? One would think that the conservative bond market with billions of dollars on the line would be the best place to get an inflation forecast.

Update: I should have mentioned that the forecasted values above are the averages of all the individual economic forecasts provided by the economic forecasters to the survey.
Posted by David Beckworth at 12:56 PM