How Low Must It Go?

Recently I noted that aggregate demand forecasts are falling.  Well today I learned that it gets worse: aggregate demand is already falling!  Macroeconomic Advisers just updated its monthly nominal GDP series, a measure of aggregate demand,  and it shows a decline for May and June as seen below (click on figure to enlarge): 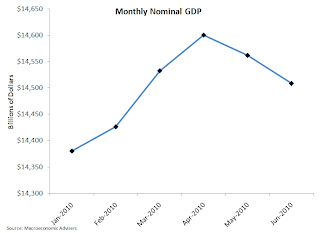 I shouldn't be surprised with these numbers since expectations of future economic activity affect current spending decisions and for some time expectations have been deteriorating. Still, I was shocked to see the outright decline in May and June. Let's be clear what this development means: total current dollar spending declined during May and June in the U.S. economy.  And most likely it continued to fall in July and August given the weak economic outlook.  This makes me wonder how low the dollar size of the U.S. economy must go before the Fed gets serious and pulls out its big guns?
Posted by David Beckworth at 11:15 AM