The FOMC Decision: A NGDP Perspective

The FOMC voted this week not to raise its target interest rate and signaled no additional hikes are planned for this year conditional on the outlook. This is a big change from last fall when the FOMC was talking up multiple rate hikes and dismissing concerns about the flattening yield curve. This 11th-hour conversion to a more dovish stance is a remarkable turnaround, one that some observers like Tim Duy are calling a "major break".

The change is being attributed to growth concerns and a weakening of financial markets. I do not want to go through all the indicators supporting the Fed's worries, but I do want to see whether Nominal GDP (NGDP) lends support to this decision. As many readers of this blog know, I believe that properly evaluated NGDP growth is probably the best indicator of the stance of monetary policy. Okay, so what does it say?

To answer that question, I like to look at a measure called the 'sticky forecast' growth path for NGDP and compare it to the actual level of NGDP. In this note, I show the spread between these two measures--the NGDP gap--provides a good measure of the stance of short-run macroeconomic policy. Here is the intuition for the metric:

Given the public's expectations of nominal income, the sticky-forecast path of NGDP can be viewed as the neutral level of NGDP. Unlike the unobservable u*, r*, and y*, this neutral measure is simply a weighted quarterly forecast of nominal income found in the Survey of Professional Forecasters. There is no need for guesswork. The details of its construction are in the note, but it is worth mentioning that the NGDP gap created by this measure is remarkably similar to many measures of slack. I should also note that I constructed this measure using the IMF NGDP forecasts for 21 countries in a forthcoming paper (working paper version) and find it works well cross country too.

Here are what the sticky forecast and actual NGDP paths looks like: 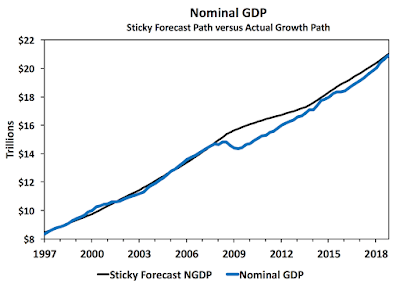 And here is the NGDP gap--the percent difference between the two series: 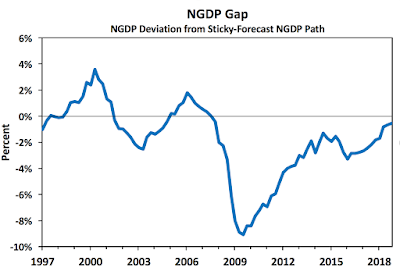 This NGDP gap shows a standard story: aggregate demand growth overheated some in the late 1990s and to a lesser extent in the early-to-mid 2000s followed by a sharp collapse in 2008. A slow recovery followed that stalled around 2015-2016 and then started rising again. Currently, the NGDP gap is slightly below the neutral level of zero percent. This graph suggest it was appropriate for the Fed to pause on rate hikes this week. It also indicates, however, that the Fed arguably should not have started raising rates in 2015.

While the NGDP gap provides a nice cross check on the stance of monetary policy, it can also be used in an explicit monetary policy reaction function. Here is one I created:

Here it is a market interest rate,  the first term measures the gap between the forecasted and targeted NGDP growth rates over the next year,  and the second term is the NGDP gap as noted above. The 1-year treasury yield is used for it and the 1-year NGDP growth forecast comes from the Survey of Professional Forecasters. The NGDP target is set to 5.5 percent for 1985-2008 and 4 percent for 2009-2018 to reflect the actual trend NGDP growth rates experience during those times.  The figure below plots the rule for different values of the coefficients: 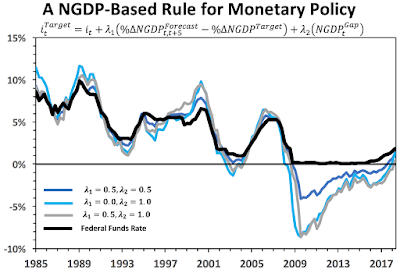 Again, we see that if anything, the prescribed target interest rate is a little below the actual one suggesting the Fed's pause is appropriate. So overall, a smart move by the Fed and arguably one that is overdue.

Finally, I want to share one more application of the NGDP Gap that I have made before. The NGDP Gap does a decent job explaining nominal wage growth as seen in the figure below. The red dots show the portion of the scatterplot attributed to past few years. While the R2 is 65 percent for the overall sample, the sample since 2016 has an R2 of 85 percent. Here is hoping the Fed starts paying more attention to NGDP as a cross check for assessing the stance of monetary policy. 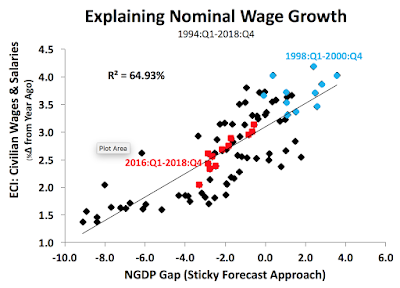