My latest Macro Musing podcast is with Josh Zumbrum. Josh is a national economics correspondent for the Wall Street Journal. He joined me to talk about the angst facing the economics profession in this current environment. We also talked about the future of economic journalism, economic facts, and what really drives inflation.

It was fascinating conversation throughout. You can listen to the podcast on Soundcloud, iTunes, or your favorite podcast app. You can also listen via the embedded player above. And remember to subscribe since more episodes are coming.

My latest Macro Musings podcast is with James Bullard. James is the President of the St. Louis Federal Reserve Bank and an accomplished economic scholar. He joined me for a great conversation on macroeconomics that covered everything from the determinants of inflation to the Fed's balance to the future path of monetary policy. We also discussed Jame's work on imperfect credit markets and how it provides a another justification for NGDP level targeting.

This was a fascinating conversation throughout and the transcripts for the show are here. You can listen to the podcast on Soundcloud, iTunes, or your favorite podcast app. You can also listen via the embedded player above. And remember to subscribe since more episodes are coming.

My latest Macro Musings podcast is with Tyler Cowen. Tyler is a professor of economics at George Mason University. He joined me to discuss his new book, The Complacent Class: The Self-Defeating Quest for the American Dream. In it, Tyler argues that the restlessness and willingness to take risks have been key traits throughout American history has been waning. In the last few decades, American society has become more risk-averse and this has led to less innovation and dynamism in the economy.

Tyler notes that this risk aversion has bled over into macroeconomic policy and may be a contributor to the slow recovery following the 2008 crisis.

This was a fun and fascinating conversation throughout. You can listen to the podcast on Soundcloud, iTunes, or your favorite podcast app. You can also listen via the embedded player above. And remember to subscribe since more episodes are coming.
Posted by David Beckworth at 2:15 PM 1 comment:

My latest Macro Musings podcast is with George Selgin. George the director of the Cato’s Institute for Monetary and Financial Alternatives and is a former professor of economics at the University of Georgia.

George joined me to talk about the normalization of Fed policy and his new proposal to reform open market operations.  It was interesting conversation throughout.

You can listen to the podcast on Soundcloud, iTunes, or your favorite podcast app. You can also listen via the embedded player above. And remember to subscribe since more episodes are coming.
Posted by David Beckworth at 9:48 AM 3 comments:

A Challenge to the Fed's Normalization Plans: the IOER-Treasury Yield Spread

Over at U.S. News and World Report, I have a new article up on the next big challenge facing the Fed: normalizing its balance sheet. Some excerpts:


This path to monetary policy normalization.... may be fraught with surprises and setbacks. Not only must the Fed avoid getting ahead of the recovery with its interest rate hikes, but it must delicately navigate the shrinking of a balance sheet that has grown fourfold since 2008. This latter task may prove to be especially daunting since it puts the Fed in unchartered waters. Never before has the Fed had to shrink its balance sheet...

I go on to discuss some of the many challenges the Fed may face in attempting to shrink its balance sheet. One of them is dealing with the potential stresses caused by the new regulatory demands of the liquidity coverage ratio running up against the spread between IOER and treasury bills:


The second reason the scaling back of the Fed's balance sheet may be challenging is that post-2008 regulation now requires banks to hold more liquid assets. Specifically, banks now have to hold enough high-quality liquid assets to withstand 30 days of cash outflow. This liquidity coverage ratio has increased demand for such assets of which bank reserves and treasury securities are considered the safest. So, in theory, as the Fed shrank its balance sheet, the banks could simply swap their excess reserves (that the Fed was pulling out of circulation) for treasury bills (that the Fed was putting into circulation). The challenge, as observed by George Selgin, is that the Fed's interest on excess reserves has been higher than the interest rate on treasury bills. This creates relatively higher demand for bank reserves. 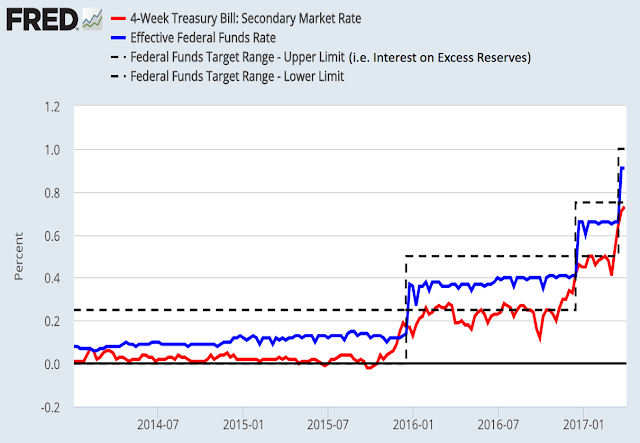 This is just one of the challenges the Fed faces in shrinking its balance sheet. Read the rest of the piece for the others I outline.

P.S. While it is easy to understand why the effective federal fund rates falls within the corridor, it is not clear why the 4-week treasury bill interest rate has not conformed to it. Arbitrage should push them closer together, so there must be some friction. One obvious one is the limited access to the Fed's balance sheet. Even with RRP, there are still only so many firms that can effectively tap into the Fed's balance sheet. I suspect that if the Fed further opened up its balance sheet some of this spread would disappear. Whether that is a desirable objective, however, is an altogether different question (though it is discussed in this weeks Macro Musings podcast).
Posted by David Beckworth at 9:16 PM 5 comments: