My latest Macro Musings is with Gauti Eggertson. Gauti is a professor of economics at Brown University and formerly worked in the research departments of the International Monetary Fund and the Federal Reserve Bank of New York. He has written widely on liquidity traps, deflation, and the zero lower bound (ZLB) and joined me to talk about these issues.

This was a fun conversation and a good look back at the challenges and shortcomings of macroeconomic policy since the crisis in 2008. One of the big takeaways from our conversation, at least for me, is that central banks during this time ignored many of the key findings in the literature when it comes to best practices at the ZLB.

Before getting to these missed opportunities, it is worth recalling the nature of the ZLB problem. It emerges when there has been a severe recession that forces down the 'natural' or market-clearing level of short-term interest rates to a level well below 0%. The Fed's normal response, lowering interest rates to the level of the natural interest rate, does not work here because the Fed will run up against a lower bound where people would rather hold cash than earn a negative interest rate on their deposits. This lower bound is effectively a price floor that prevents the economy from properly healing and quickly returning to full employment.

So what can policymakers do? Gauti's work gives an answer. Specifically, his 2003 paper with Michael Woodford (which builds upon Paul Krugman's 1998 paper) shows that policymakers need to credibly commit to an expected path of interest rates that will restore the pre-crisis path of the price level. Put differently, Gauti's work implies the best defense against and escape from a depressed economy is some kind of level targeting. Gauti favors an output-gap adjusted price level target. As Michael Woodford noted in his 2011 talk, this effectively amounts to a nominal GDP level target or restoring the growth path of nominal spending.

The Fed, instead, tried various rounds of QE. And it did so in exactly the manner that Eggertson and Woodford (2003) and Krugman (1998) said would lead to the famous  'irrelevance results'. That is, the Fed did these programs using temporary monetary base injections, whereas only permanent injections matter.

What is truly surprising about this observation is that the permanent injections point is widely understood. For example,  here is a list of prominent New Keynesians who acknowledge it (including former Fed chair Ben Bernanke). And here is a list of quantity theory advocates making the same point.

To be clear, this point does not mean QE will have no effect. Rather, is says that temporary injections will not generate the robust aggregate demand growth needed to quickly escape a ZLB environment.

So why did the Fed ignore the literature and fall right into the irrelevance results trap? I have a working paper that takes a stab at this question. I argue there were both external forces (public's fear of inflation vented via Congress) as well as internal ones (Fed still fighting the last battle and suffering from loss aversion) that kept the Fed timid. In our interview, Gauti made an interesting observation related to this point. The Fed seemed okay being aggressive with QE, but not with reflation. It is a bit of puzzle why it was so bold in the former but timid in the later.

Gauti and I also touched on how best to sell level targeting to policymakers and the public. Here is a recent Bloomberg article that looks at Gauti's innovative attempt to do so at the New York Fed in 2010 using 'Inflation Budget Accounting". Below is an excerpt:

The FOMC would then announce an "easing bias" until the inflation debt accumulated in the current recession has been extinguished. If this is credible, a deflationary reading of the data would signal a larger "easing bias" going forward.

As I note in my working paper mentioned above, the Fed has been explicit about its plan to eventually shrink its balance sheet. It said so in its exit strategy plans reported in the June 2011 and September 2014 FOMC meetings. Janet Yellen recently reiterated those plans in her August 2016 Jackson Hole speech (see footnote 13). More recently, the Federal Reserve updated its basic guidebook to monetary policy in October 2016. Here too it stresses the balance sheet will be reduced:

As the policy normalization process proceeds, the Federal Reserve’s securities holdings—and the supply of reserve balances—will be reduced in a gradual and predictable manner primarily by ceasing to reinvest repayments of principal on securities held in the portfolio...
The FOMC intends that the Federal Reserve will, over the longer run, hold no more securities than necessary to implement monetary policy efficiently and effectively, and that it will hold primarily Treasury securities (p.52)

And if there were any questions about what this means, the Fed later notes that "no more securities than necessary" means doing away with the overnight  reverse repurchase facility:

I would also add from a political economy perspective that the balance sheet will have to be reduced given IOR. The increasingly bad optics of the Fed paying banks larger interest payments as interest rates go up  will force the Fed's hands on reducing its balance sheet.
Posted by David Beckworth at 10:36 AM 14 comments: 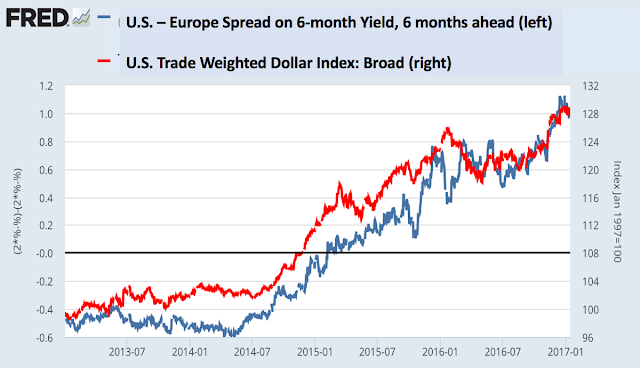 1 I calculate this 6 month interest rate, 6 months ahead as follows.
Read more »
Posted by David Beckworth at 6:10 PM No comments:


My latest Macro Musing podcast is with Anat Admati. Anat is a professor of finance and economics at Stanford University. Since the crisis in 2008, she has also been a fervent advocate of banks using more equity and less debt to fund their investments. As part of this effort, Anat coauthored the book "Bankers' New Clothes: What's Wrong with Banking and What to Do About it". She joined me to talk about these and other issues related to the stability of the U.S. banking system.

It was a fun and interesting conversation throughout. We covered everything from the distortions created by the Basel bank regulations to the still inordinate amount of bank leverage to the prospects for a safer financial system. One of the more sobering implications of our discussion is that the U.S. banking system is not much safer today than it was in 2008. This is a point also made by Larry Summers in a recent Brookings Paper.

You can listen to the podcast on Soundcloud, iTunes, or your favorite podcast app. You can also listen via the embedded player above. And remember to subscribe since more episodes are coming.

Posted by David Beckworth at 1:50 PM No comments:

My latest Macro Musing podcast is with Allan Meltzer. Allan is a professor of economics at Carnegie Mellon University and a visiting fellow at the Hoover Institution. He is also a well-known monetarist and author of the authoritative multi-volume history of the Fed.

We had a wide-ranging conversation on everything from Allan's role in the Monetarist's Counterrevolution to his reinterpretation of Keyne's General Theory to his take on current Fed policies. Among other things, I learned that Allan formerly worked under Paul Volker in the Kennedy Administration.

This was a fun interview and Allan showed he still has a lot of spunk in him. The interview taped live in front of audience at the Southern Economic Association meetings last November.

You can listen to the podcast on Soundcloud, iTunes, or your favorite podcast app. You can also listen via the embedded player above. And remember to subscribe since more episodes are coming.
Posted by David Beckworth at 11:16 AM 1 comment:


My latest Macro Musings podcast is with Ylan Muy of the Washington Post. She was the Fed beat reporter for several years and now covers economic policy at the White House. She joined me to discuss what it was like covering the Fed and what we might expect going forward from President Trump's economic policies.

This was a fascinating conversation throughout and we covered everything from the tight security of FOMC press meetings to the future of the Fed's balance sheet to whether the Fed will ever have a truly symmetric 2% inflation target. We also considered whether Trump's economic policies will truly live up to the market's expectations for them. One thing we do know for sure is that 2017 will be an interesting year for U.S. economic policy and Ylan will have much to cover for the Washington Post.

Ylan also shared that she is working with the Brookings Institute on a book about negative interest rates as a tool for monetary policy. It sounds interesting and I look forward to reading it.

Finally, Ylan and I discussed the lack of women in macroeconomics. A recent article in the Journal of Economic Perspectives reminded us that a disproportionately small share of women are in the economics profession. This problem seems to be even more pronounced in macroeconomics. Ylan shared her observation on this challenge and talked about her related work on Janet Yellen breaking barriers in macroeconomics.

This was great episode to start the new year. You can listen to the podcast on Soundcloud, iTunes, or your favorite podcast app. You can also listen via the embedded player above. And remember to subscribe since more episodes are coming.