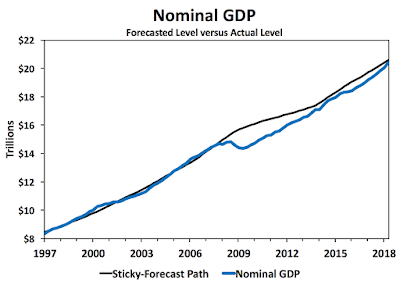 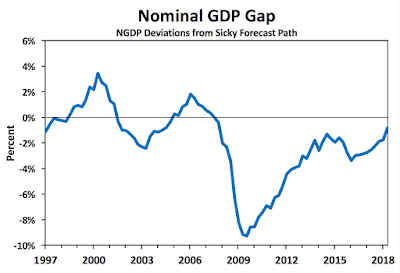 How Close is the Fed to a Corridor System?

I recently participated in an AEI event that showcased George Selgin's new book on the Fed's floor  system. My role at the event was to comment, along with Bill Nelson, on George's book.

Readers of this blog will know I share many of George's concerns about the floor system that are outlined in his book and I would like to see the Fed move to a symmetric corridor system. The FOMC spent a good portion of its November meeting discussing this issue. My comments at the AEI event, however, were not on the tradeoffs between a corridor and floor system but rather on how close the Fed currently is to a corridor system. There are some indicators that the Fed may not be too far away.

To illustrate my point, consider the figures below. The question I considered is how far the Fed is from transitioning from the figure on the left below to the one on the right. Note, that there are two ways to make this move. First, the supply of reserves (red line) can shift back until it hits the slopping part of the reserve demand curve. Second, the demand for reserves (blue line) can shift out until the slopping part of the demand hits the reserve supply schedule. Or, there can be some combination of both developments. In either case, reserves become relatively scarce, unsecured interbank lending revives, and reserves once again will bear an opportunity costs.

In my remarks I noted that there have been both supply and demand shifts that have moved the Fed closer to a corridor system.  (For more details on this simple supply-demand model see my recent paper.)

On the supply side, there has been a reduction in reserves going on since August 2014. Initially, the decline was largely due to the the growth of the Treasury General Account (TGA) and overnight reverse repos displacing reserves. Since October 2017 it also been the result of the Fed decreasing reinvestment of principal payments on its asset holdings. Collectively, these actions have led to a decline of about $1 trillion dollars in reserves over the past four years. Reserves are now just over $1.7 trillion. This can be seen in the figure below: 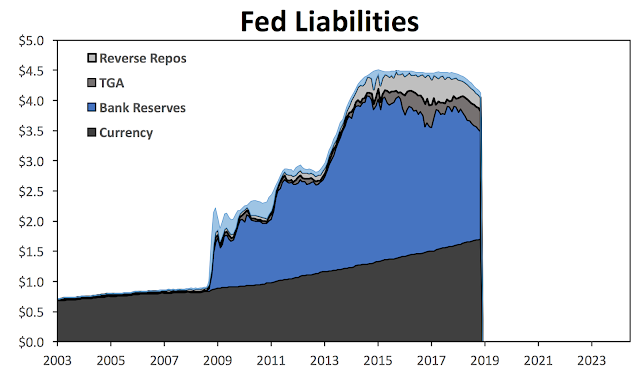 On the demand side, there have been new regulations and apparently a general rise in risk aversion that has led to a higher demand for reserves than existed before 2008. The main regulatory development is the liquidity coverage ratio (LCR) which requires banks to hold enough liquid assets to cover 30 days of withdrawals. The LCR treats bank reserves and treasuries as the top "high quality liquid assets" (HQLA) in meeting this requirement.

For most of the past decade, the IOER rate has been higher than that yield on overnight treasury repo rates creating an elevated demand for reserves to meet the HQLA. As seen below, however, this relationship has changed with measures of treasury repo rates bouncing around--and increasingly above--the IOER rate. As I have explained elsewhere, this is largely due to President Trump's budget deficits sharply increasing the supply of treasury bills. 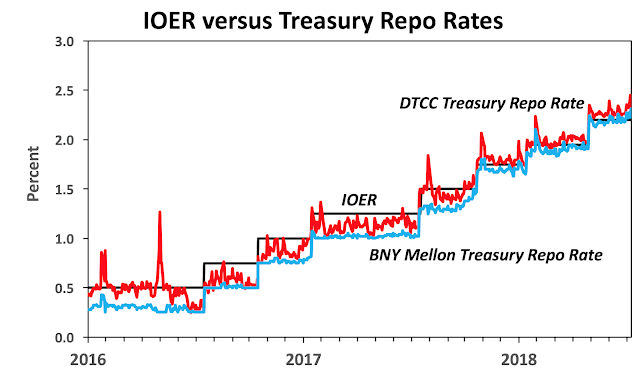 This reversal in relationship should mean, all else equal, that that banks will be indifferent between holding bank reserves and treasury bills. However, the most recent Senior Financial Officer Survey indicates that even in this "constellation" of interest rates banks still want to hold a lot of reserves relative to the pre-crisis levels. Specifically, the banks indicate they would want to hold $617 billion in reserve balances. Now the survey only covers banks that currently hold two-thirds of bank reserves. Consequently, extrapolating this number out another third puts the total desired reserve balances at $927 billion. This implies a large rightward shift of the reserve demand curve compared to pre-crisis demand for reserves.

Given these developments, if the Fed continues to reduce its balance sheet by $50 billion a month then it should reach a point of reserve scarcity (i.e. $927 billion) by early-to-mid 2020. This can be seen in the figure below. 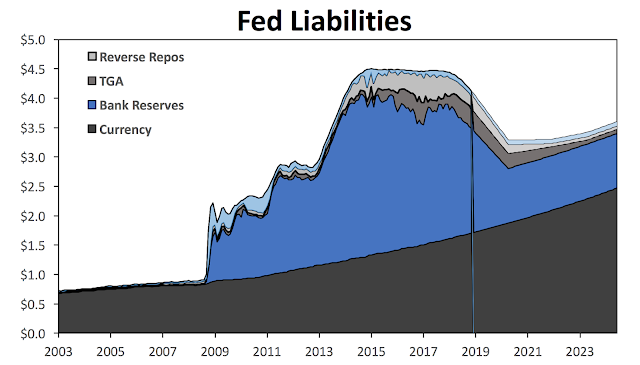 Put differently, the Fed could be back in a corridor system as early as 2020 if it were to put its balance sheet reduction on autopilot. Note that balance sheet would be permanently larger--even after accounting for currency or NGDP growth--at a size near $3 trillion.

Interestingly, the Senior Financial Officer Survey also indicates that if the Fed really wanted to shrink the supply of reserves to levels comparable to the pre-crisis system there is a way. All that is needed is for the price to be right.

Specifically, the survey asked the banks whether they would decrease their reserve holdings further if comparable short-term interest rates were to rise above IOER by 5, 25, and 50 basis points (bps). The percent of banks that answered yes were 8, 46, and 49 percent, respectively. So somewhere between 5 and 25 bps, there is a threshold were a large number of banks would find it worthwhile to depart with reserves and hold treasury bills. Everyone has a price.1 Obviously, in this case the time to a corridor system would take longer as the reserve demand curve will have shifted inward.

The big takeaway, for me, is that the Fed may not be that too far away from a corridor system that maintains a moderately-sized balance sheet (owing to the residual demand for bank reserves). For reasons outlined in my previous post, however, I would prefer a return to a corridor system with fewer reserves and the Senior Financial Officer Survey suggests this outcome is possible.

P.S. Bill Nelson of the Bank Policy Institute had some really interesting comments at the event.

1 What is really interesting about this finding is that Dutkowsky and VanHoose (2018) find in a theoretical model that banks would stop holding large amounts of excess reserves once the spread crossed 6 bps. This theoretical results fits nicely with the survey showing their is a threshold between 5 and 25 bps.
Posted by David Beckworth at 9:20 PM 6 comments: