As we head into the second half of the year, the swift recovery many were hoping for is facing an uncertain future. The resurgence of the COVID-19 virus and concerns about dwindling fiscal support have many worried. I submit that even in the absence of these worries, the recovery would still be on shaky grounds without the Fed explicitly committing to 'make-up' policy.
Make-up policy is an explicit framework that allows the Fed to correct for past misses in its target. In the case of a recession, this feature allows the FOMC to be fine with inflation temporarily overshooting its target while the economy bounces back. Tolerating this overshoot implies a similar surge in nominal income that would restore it to the levels expected by household and business prior to the crisis. This restoration is important since many fixed-price nominal financial obligations like mortgages, loans, and leases were made based on these forecasts of nominal income.
Without make-up policy, the Fed may feel uncomfortable with inflation temporarily overshooting and prematurely tighten monetary policy. This would prevent nominal income from returning to its pre-crisis trend levels and trigger secondary spillover effects like mass insolvencies and other financial stress.
Chris Condon notes that the Fed is aware of this issue and has been discussing it at the FOMC meetings this year.  For all this talk, though, members of the FOMC have given no indication in the Summary of Economic Projections (SEP) that they are taking make-up policy seriously. The SEP indicates persistent undershooting of its inflation target and consequently, a lack of make-up policy in its implicit nominal income forecasts.
Nominal income or NGDP can be constructed from Table 1 in the SEP by combining the real GDP growth forecasts with the PCE inflation forecast plus 20 basis points (to make it GDP Deflator equivalent). This is done in a revised version of Table 1 below: 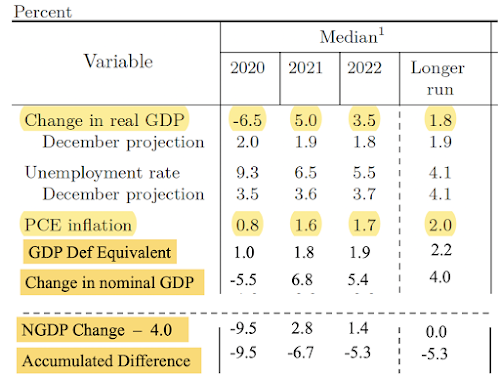 The second-to-the-last row of the table is titled "NGDP Change - 4.0" and is the forecasted NGDP growth rate minus the pre-crisis trend of 4 percent growth. The final row accumulates up these misses and reveals NGDP is still 5.3 percent below its per-crisis path even after 2022. Put differently, there is a permanent loss in nominal income according to the SEP.
These forecasts are applied to the current NGDP levels to create a forecast in dollar level form and are presented in the figure below. The sustained drop in nominal income can be seen as the difference between the pre-crisis trend and the forecasted level of NGDP: 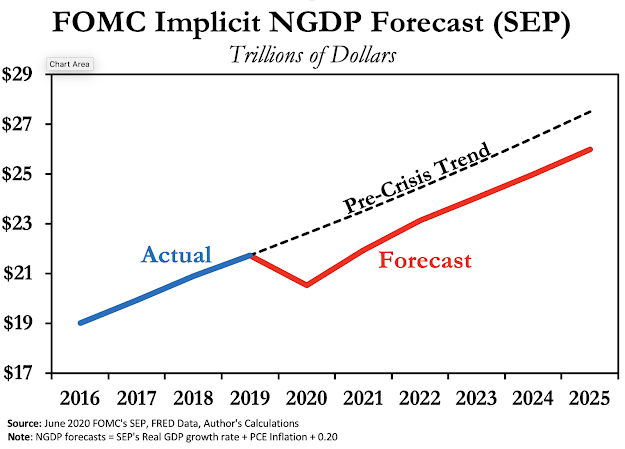 Note, that this forecasted loss is based on FOMC members assessing what is "appropriate monetary policy" for the SEP. The FOMC, in short, currently does not see make-up policy in the cards nor does it see it as appropriate monetary policy. Similar implications fall out of other Federal Reserve forecasts, including this one from the New York Fed.
But it not just the Fed who thinks there will be no make-up policy and therefore a sustained loss in nominal income. First, the CBO's July update  shows a persistent gap between nominal income and its pre-crisis trend over the next decade. This forecast is conditioned on, among other things, what the CBO sees as likely monetary policy going forward. 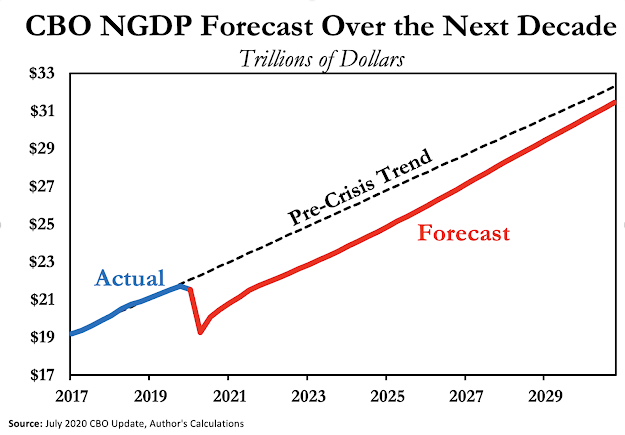 Second, the Blue Chip consensus forecasts of NGDP also shows a sustained drop in nominal income. The graph below shows this drop and compares it to the neutral level of NGDP, the level of nominal income needed to meet the expectations of households and businesses plans in years leading up to the crisis. The forecasted gap between these two measures is called the NGDP Gap. 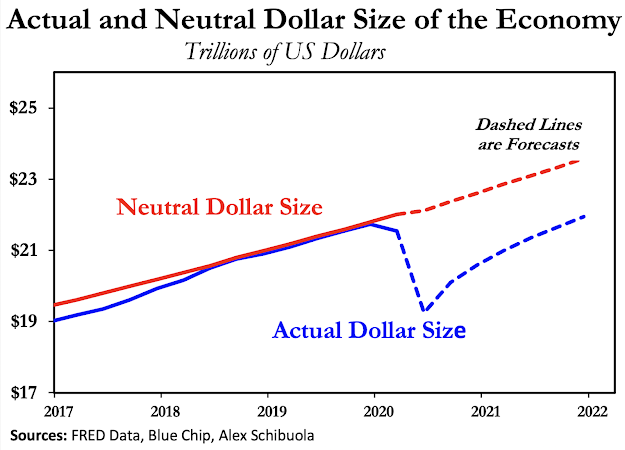 So wherever one looks, make-up policy is not being forecasted. Its absence does not bode well for the recovery and underscores the urgency of the FOMC review of its framework. I really dread repeating the slow recovery of the last decade. So please FOMC, bring this review to a vote and give make-up policy a chance during this crisis.
Update: A reader informed me that adding 20 bps to the PCE inflation to make it equivalent to GDP deflator inflation may overstate the difference. If so, the analysis above actually understates the permanent loss in nominal income projected by the FOMC's SEP.
Posted by David Beckworth at 4:22 PM 7 comments: