The Best Way to Narrow the Fed's Mandate

I have a new article up at National Review Online where I argue that the best way for Congress to narrow the Fed's mandate is through nominal GDP level targeting.  One point mentioned in the piece is that because a nominal GDP target ignores aggregate supply shocks it dominates an inflation target.  This applies equally well to a price level target.  Another way of thinking about this is that movement in the price level is a symptom of all underlying shocks, whereas movement in nominal spending is an underlying shock itself (i.e. an aggregate demand shock).  The Fed will be far more effective if responds directly to the underlying shock over which it has influence--the aggregate demand shock--than responding indirectly to an imprecise symptom of that shock.
The importance of nominal spending shocks can be seen in the three figures below.  The first  figure shows the growth rates  of nominal GDP with the blue line, real GDP with the red line, and the GDP deflator (i.e. inflation) with the green line.  The figure reveals that changes in nominal spending get translated largely into changes in real economic activity.  (See Marcus Nunes for more analysis on this figure.) 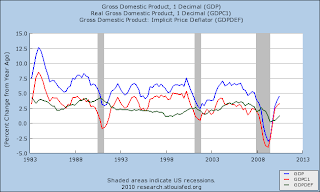 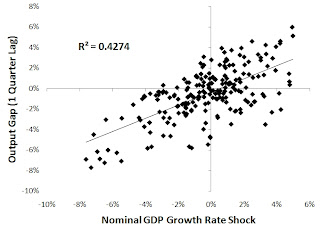 The figure shows a remarkably close relationship between nominal spending shocks and the 1-quarter lag output gap.  The same shock series is then constructed for the GDP deflator and plotted against the lagged output gap. Here is the result: 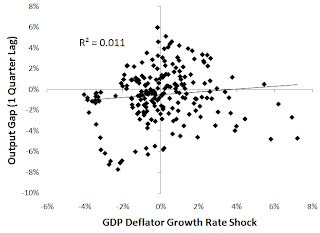 Price level shocks are barely related over this long sample.  If anything the nominal GDP shock series probably understates the importance the shocks given how crudely they are constructed But the point is made:  it makes more sense for the Fed to target the nominal GDP level than inflation or the price level.
For more on nominal GDP targeting see these previous posts:


(1) The Case for Nominal GDP Targeting.
(2) Thoughts on the Tyler Cowen-Scott Sumner Debate.
(2) Why a Nominal GDP Level Target Trumps a Price Level Target.
(3) Target the Cause Not the Symptom.
Posted by David Beckworth at 10:09 AM