There is No Great Stagnation in the Durables Sector

That is what Noah Smith finds when he graphs TFP by durable and nondurable sectors.   Here is the stunning figure he provides: 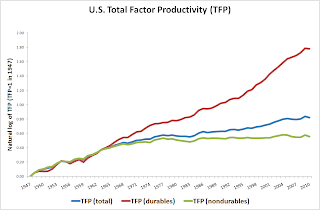 
From this graph, it definitely looks like something big did happen to technological progress. But it looks like it happened not in 1973, as Cowen claims, but a decade earlier. In the 15 years to 1963, the two sectors progressed pretty much in tandem. But sometime in the early- to mid-60s, they diverged wildly, with nondurables TFP rising anemically through the late 70s and then basically flatlining until now. Durables TFP looks to have suffered its own very minor slowdown in the mid-70s (which is probably the reason why overall TFP looks like it took a turn around that time), but then exploded with unprecedented vigor after '93.

Smith is responding to an earlier post of  mine that Tyler Cowen linked to yesterday.  In that post I showed using John Fernald's data that the TFP growth rate had slowed down dramatically since 1973.  Using the same data set, Smith shows us the Great Stagnation only is true for nondurable output.  For durable output there never is a slowdown.  How do we make sense of this finding?
Posted by David Beckworth at 12:56 AM