Liquidity Traps Are Very Unlikely, Even at the Zero Bound: A Rejoinder to Matt Rognlie

Matt Rognlie takes to task Tyler Cowen for claiming there is no liquidity trap. He makes his case for the liquidity trap and then closes with this statement:

This doesn’t mean that all hope is lost: the Fed can still make a difference by shaping expectations of the future trajectory of nominal interest rates, or by making unconventional bond purchases so large that they trigger portfolio balance effects and drive down interest rates on longer-maturity assets...Just don’t go around claiming that 0% isn’t a barrier—because sadly, it is.

So is there any evidence that money demand can be influenced by a spectrum of interest rates?  Some older studies do show this, but for now here are three figures that suggest that answer is yes.  They all show MZM velocity (i.e. GDP/MZM) to be systematically related to various interest rates.  (The R2 for these relationships is always above 70%.) 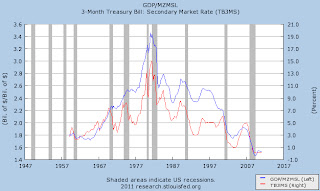 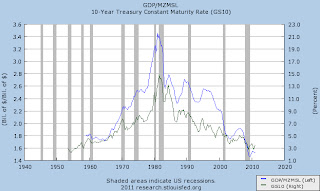 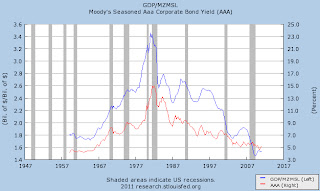 In general, the 0% bound on short-term interest rates is not a sufficient condition for a liquidity trap.  It requires individuals to become satiated with money balances which implies there must be deflation.  Even then, Peter Ireland has shown using the Krugman liquidity trap model that if there is population growth then there will be distributional effects of money growth that will eliminate the liquidity trap.

Currently, we are far from a liquidity trap though money demand remains elevated and a drag on the economy.  That being the case, there is much that monetary policy could do to address the excess money demand problem and get nominal spending going again.  Here is one suggestion.