Is the Equation of Exchange Still Useful?

Matt Rognlie says no.  Nick Rowe says yes and I agree. Nick Rowe argues MV=PY (where (M = money supply, V = velocity, PY = nominal GDP) is useful because it highlights the fact that money is special: it is the only asset on every other market (i.e. it is the medium of exchange) and thus is the only one that can affect every other market.  Money, therefore, is what makes it possible to have economy-wide recessions.  Even in the recent recession where the financial crisis increased the demand for safe assets, it was not the elevated demand for safe assets itself that caused the recession but the fact that this demand for safe assets was met, in part, by going after the safe asset money.
I view the equation of exchange as useful because it provides a summary measure of what is causing swings in nominal spending and the role, if any, monetary policy is playing in those swings.  For example, the equation of exchange in its expanded form sheds a lot of light on what caused the crash in nominal spending during late 2008, early 2009.  It also explains why the subsequent recovery  in nominal spending has been sluggish.
To demonstrate these points, some definitions are needed.  Note first that since the money supply (M) is a product of the monetary base (B) times the money multiplier (m), MV=PY  can be expanded to the following:
BmV = PY
In this form, the equation says (1) the monetary base times (2) the money multiplier times (3) velocity equals (4) nominal GDP or total nominal spending (i.e. aggregate demand). The Fed has complete control over the monetary base, B, which is comprised of bank reserves and currency in circulation.
The money multiplier, m, shows to what extent the monetary base is supporting expansion of  other more commonly used money assets like checking, saving, and money market accounts.  If the monetary base is not supporting an  expansion of these other money assets it is because there is an elevated demand for the monetary base and vice versa. The money multiplier, therefore, is an indicator of the demand for the monetary base.The Fed has less control over the money multiplier--it influenced by other factors like the demand for credit as well as the banks willingness to lend--but still can shape it to some degree as it is currently doing by paying banks interest payments to sit on excess reserves.  For example, if the Fed started charging a penalty for holding excess reserves it is likely the demand for that portion of the monetary base would drop.  (Though never explicitly stated, this point was implied by Bernanke when he said that the Fed could raise the interest paid on excess reserves as a way to prevent the banks from turning them into new loans and deposits once the economy recovers.)
Velocity, V, shows how often the more commonly used money assets like checking, saving, and money accounts are used in transactions.  The lower the velocity the less these money assets are being used for spending and vice versa. Velocity, then, is an indicator of the demand for these broader measures of money assets which we call the money supply.  The Fed could also influence V by setting an explicit inflation, price level, or nominal GDP target. In short, the Fed has enough power (though maybe not the political ability) that if it really wanted to it could stabilize BmV (or MV).
With this understanding we can now look at BmV in late 2008 and early 2009 to see (1) why nominal spending crashed during this time and (2) why it has failed to have a robust recovery since then.  Using the MZM  as the measure of the money supply, the figure below reports the three series in BmV: (Click on figure to enlarge.) 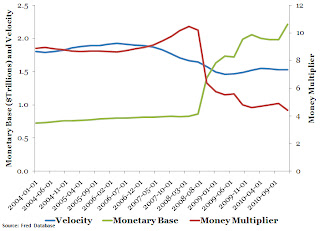 Regarding the nominal spending crash, the figure indicates that declines in the money multiplier and velocity both  pulled down nominal GDP in late 2008 and early 2009. In other words, there was a large increase in the demand for narrow and broad money.  The decline in the money multiplier at that time most likely reflected the problems in the financial system as well as the interest the Fed began paying on excess bank reserves (i.e. the demand for the monetary base spiked). The decline in the velocity was presumably the result of an increase in broad real money demand created by the uncertainty surrounding the recession. During this time the Federal Reserve significantly increased the monetary base as consequence of it buying up assets to save the financial system during QE1 ("credit easing" according to Bernanke).  The surge in the monetary base almost perfectly offset the decline in the money multiplier. On balance,then, the large collapse in  nominal spending was  mostly driven by the fall in velocity.  Note that velocity begins falling well before the financial crisis erupts in late 2008.  If only the Fed  had responded to the decline in velocity as it did to the credit panic the Great Recession may not have been so great  after all.  The Fed's inaction here amounted to a passive tightening of monetary policy.

On why nominal spending growth remains sluggish, the figure indicates that money demand is still elevated.  Both the money multiplier and velocity are far below their pre-crisis levels, though QE2 has caused the monetary base to moderately increase and support nominal spending.  Obviously, something more radical like a nominal GDP level target is needed to bring nominal spending back to a reasonable level.